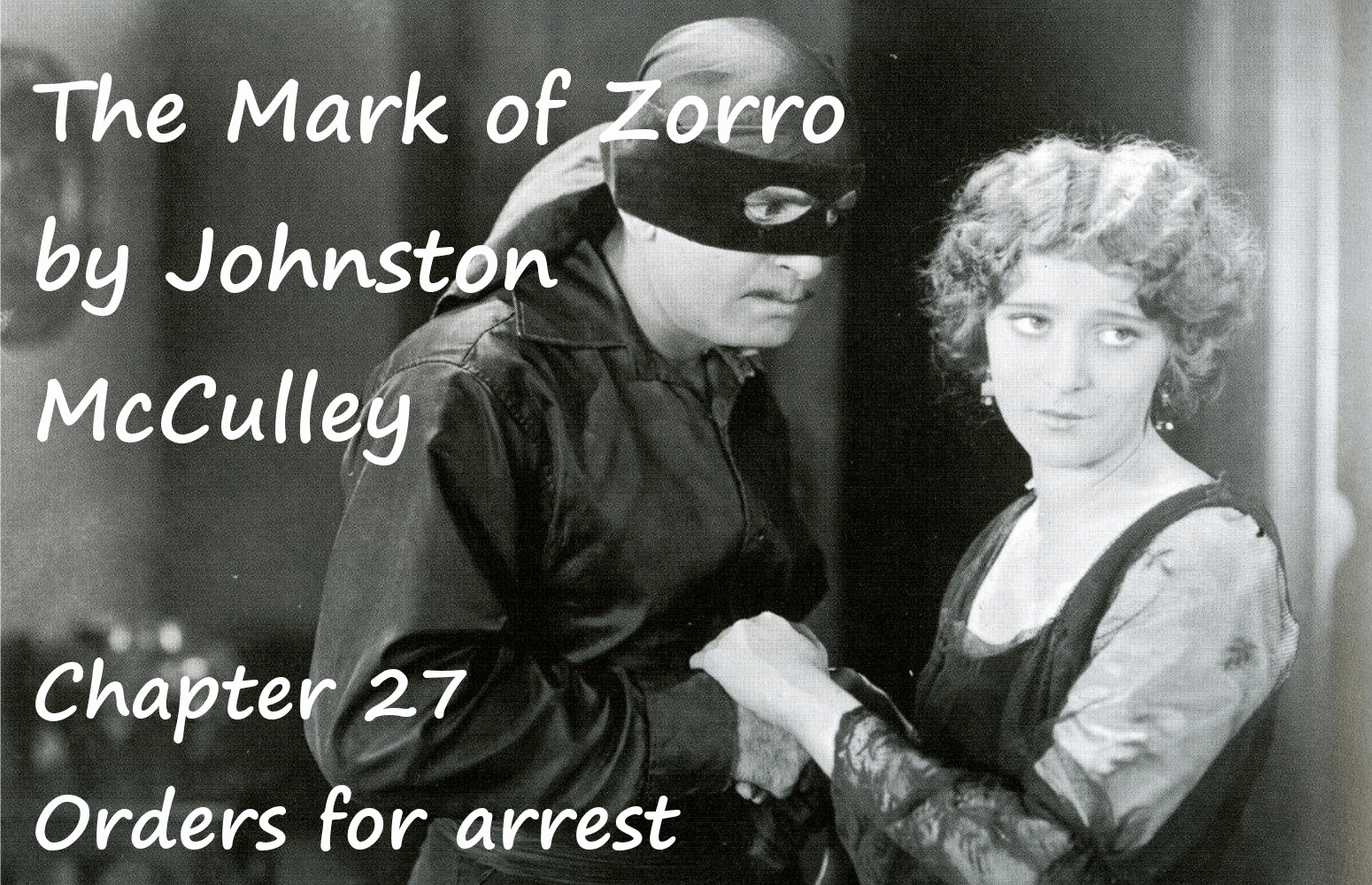 The Mark of Zorro chapter 27 Orders for arrest
Author McCulley, Johnston, 1883-1958
Title The Mark of Zorro
Note Published serially under the title: The curse of Capistrano.
Language English
Copyright Status Public domain in the USA.

Captain Ramón’s courier, sent north with the letter for the governor, had dreams of gay times in San Francisco de Asis before returning to his presidio at Reina de Los Angeles. He knew a certain señorita there whose beauty caused his heart to burn.

So he rode like a fiend after leaving his comandante’s office, changed mounts at San Fernando and at a hacienda along the way, and galloped into Santa Barbara a certain evening just at dusk, with the intention of changing horses again, getting meat and bread and wine at the presidio, and rushing on his way.

And at Santa Barbara his hopes of basking in the señorita’s smiles at San Francisco de Asis were cruelly shattered. For before the door of the presidio there was a gorgeous carriage that made Don Diego’s appear like a carreta, and a score of horses were tethered there, and more troopers than were stationed at Santa Barbara regularly moved about the highway, laughing and jesting with one another.

The governor was in Santa Barbara!

His excellency had left San Francisco de Asis some days before on a trip of inspection, and intended to go as far south as San Diego de Alcála, strengthening his political fences, rewarding his friends, and awarding punishment to his enemies.

He had reached Santa Barbara an hour before, and was listening to the report of the comandante there, after which he intended remaining during the night with a friend. His troopers were to be given quarters at the presidio, of course, and the journey was to continue on the morrow.

Captain Ramón’s courier had been told that the letter he carried was of the utmost importance, and so he hurried to the office of the comandante and entered it like a man of rank.

“I come from Captain Ramón, comandante at Reina de Los Angeles, with a letter of importance for his excellency!” he reported, standing stiffly at salute.

The governor grunted and took the letter, and the comandante motioned for the courier to withdraw. His excellency read the letter with speed, and when he had finished there was an unholy gleam in his eyes, and he twirled his mustache with every evidence of keen satisfaction. And then he read the letter again, and frowned.

He liked the thought that he could crush Don Carlos Pulido more, but he disliked to think that Señor Zorro, the man who had affronted him, was still at liberty. He got up and paced the floor for a time, and then whirled upon the comandante.

“I shall leave for the south at sunrise,” he said. “My presence is urgently needed at Reina de Los Angeles. You will attend to things. Tell that courier he shall ride back with my escort. I go now to the house of my friend.”

And so, in the morning, the governor started south, his escort of twenty picked troopers surrounding him, the courier in their midst. He traveled swiftly, and on a certain day at mid-morning entered the plaza of Reina de Los Angeles unheralded. It was the same morning that Don Diego rode to the Pulido hacienda in his carriage, taking his guitar with him.

The cavalcade stopped before the tavern, and the fat landlord almost suffered an apoplexy because he had not been warned of the governor’s coming, and was afraid he would enter the inn and find it in a dirty state.

But the governor made no effort to leave his carriage and enter the tavern. He was glancing around the square, observing many things. He never felt secure concerning the men of rank in this pueblo; he felt that he did not have the proper grip on them.

Now he watched carefully as news of his arrival was spread and certain caballeros hurried to the plaza to greet him and make him welcome. He noted those who appeared to be sincere, observed those who were in no particular haste to salute him, and noticed that several were absent.

Business must receive his first attention, he told them, and he must hasten up to the presidio. After that he would gladly be the guest of any of them. He accepted an invitation, and ordered his driver to proceed. He was remembering Captain Ramón’s letter, and he had not seen Don Diego Vega in the plaza.

Sergeant Gonzales and his men were away pursuing Señor Zorro, of course, and so Captain Ramón himself was awaiting his excellency at the presidio entrance, and saluted him gravely, and bowed low before him, and ordered the commander of the escort to take charge of the place and police it, stationing guards in honor of the governor.

He led his excellency to the private office, and the governor sat down.

“What is the latest news?” he asked.

“My men are on the trail, excellency. But, as I wrote, this pest of a Señor Zorro has friends—a legion of them, I take it. My sergeant has reported that twice he found him with a band of followers.”

“They must be broken up, killed off!” the governor cried. “A man of that sort always can get followers, and yet more followers, until he will be so strong that he can cause us serious trouble. Has he committed any further atrocities?”

“He has, excellency. Yesterday a fray from San Gabriel was whipped for swindling. Señor Zorro caught the witnesses against him on the highroad, and whipped them almost to death. And then he rode into the pueblo just at dusk, and had the magistrado whipped.

“My soldiers were away looking for him at the time. It appears that this Señor Zorro knows the movements of my force, and always strikes where the troopers are not.”

“Then spies are giving him warnings?”

“It appears so, excellency. Last night some thirty young caballeros rode after him, but did not find track of the scoundrel. They returned this morning.”

“Was Don Diego Vega with them?”

“He did not ride out with them, but he returned with them. It seems that they picked him up at his father’s hacienda. You perhaps guessed that I meant the Vegas in my letter. I am convinced now, your excellency, that my suspicions in that quarter were unjust. This Señor Zorro even invaded Don Diego’s house one night while Don Diego was away.”

“But Don Carlos Pulido and his family were there.”

“Ha! In Don Diego’s house? What is the meaning of that?”

“It is amusing,” said Captain Ramón, laughing lightly. “I have heard that Don Alejandro ordered Don Diego to get him a wife. The young man is not the sort to woo women. He is lifeless.”

“So he rides straightway to the hacienda of Don Carlos and asks permission to pay his addresses to Don Carlos’s only daughter. Señor Zorro was abroad, and Don Diego, going to his own hacienda on business, asked Don Carlos to come to the pueblo with his family, where it would be safer, and occupy his house until he returned. The Pulidos could not refuse, of course. And Señor Zorro, it appears, followed them.”

“It is laughable that Don Diego fetched them here to escape Señor Zorro’s wrath, when, in reality, they are hand in glove with the highwayman. Remember, this Señor Zorro had been at the Pulido hacienda. We got word from a native, and almost caught him there. He had been eating a meal. He was hiding in a closet, and while I was alone there and my men searching the trails, he came from the closet, ran me through the shoulder from behind, and escaped.”

“The low scoundrel!” the governor exclaimed. “But do you think there will be a marriage between Don Diego and the Señorita Pulido?”

“I imagine there need be no worry in that regard, excellency. I am of the opinion that Don Diego’s father put a flea in his ear. He probably called Don Diego’s attention to the fact that Don Carlos does not stand very high with your excellency, and that there are daughters of other men who do.

“At any rate, the Pulidos returned to their hacienda after Don Diego’s return. Don Diego called upon me here at the presidio, and appeared to be anxious that I would not think him a man of treason.”

“I am glad to hear it. The Vegas are powerful. They never have been my warm friends, yet never have they raised hands against me, so I cannot complain. It is good sense to keep them friendly, if that be possible. But these Pulidos—”

“Even the señorita appears to be giving aid to this highwayman,” Captain Ramón said. “She boasted to me of what she called his courage. She sneered at the soldiers.

“Don Carlos Pulido and some of the frailes are protecting the man, giving him food and drink, hiding him, sending him news of the troopers’ whereabouts. The Pulidos are hindering our efforts to capture the rogue. I would have taken steps, but I thought it best to inform you and await your decision.”

“There can be but one decision in such a case,” said the governor loftily. “No matter how good a man’s blood may be, or what his rank, he cannot be allowed to commit treason without suffering the consequences. I had thought that Don Carlos had learned his lesson, but it appears that he has not. Are any of your men in the presidio?”

“Some who are ill, excellency.”

“That courier of yours returned with my escort. Does he know the country well hereabouts?”

“Certainly, excellency. He has been stationed here for some little time.”

“Then he can act as guide. Send half my escort at once to the hacienda of Don Carlos Pulido. Have them arrest the don and fetch him to carcel, and incarcerate him there. That will be a blow to his high blood! I have had quite enough of these Pulidos.”

“And the haughty doña, who sneered at me, and the proud señorita who scorned the troopers?”

“Ha! It is a good thought! It will teach a lesson to all in this locality. Have them fetched to carcel and incarcerated also!” the governor said. 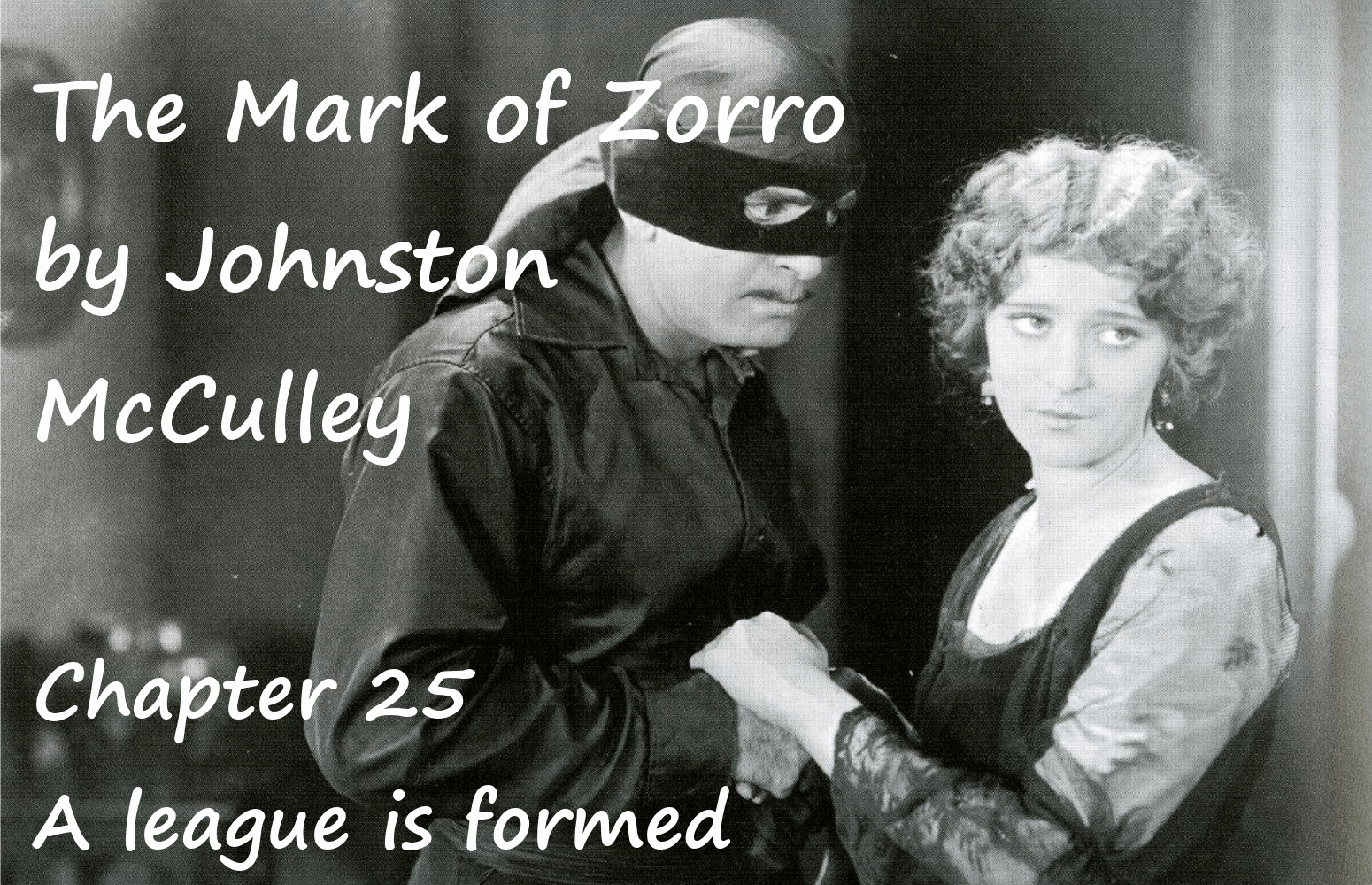 The Mark of Zorro chapter 25 A league is formed 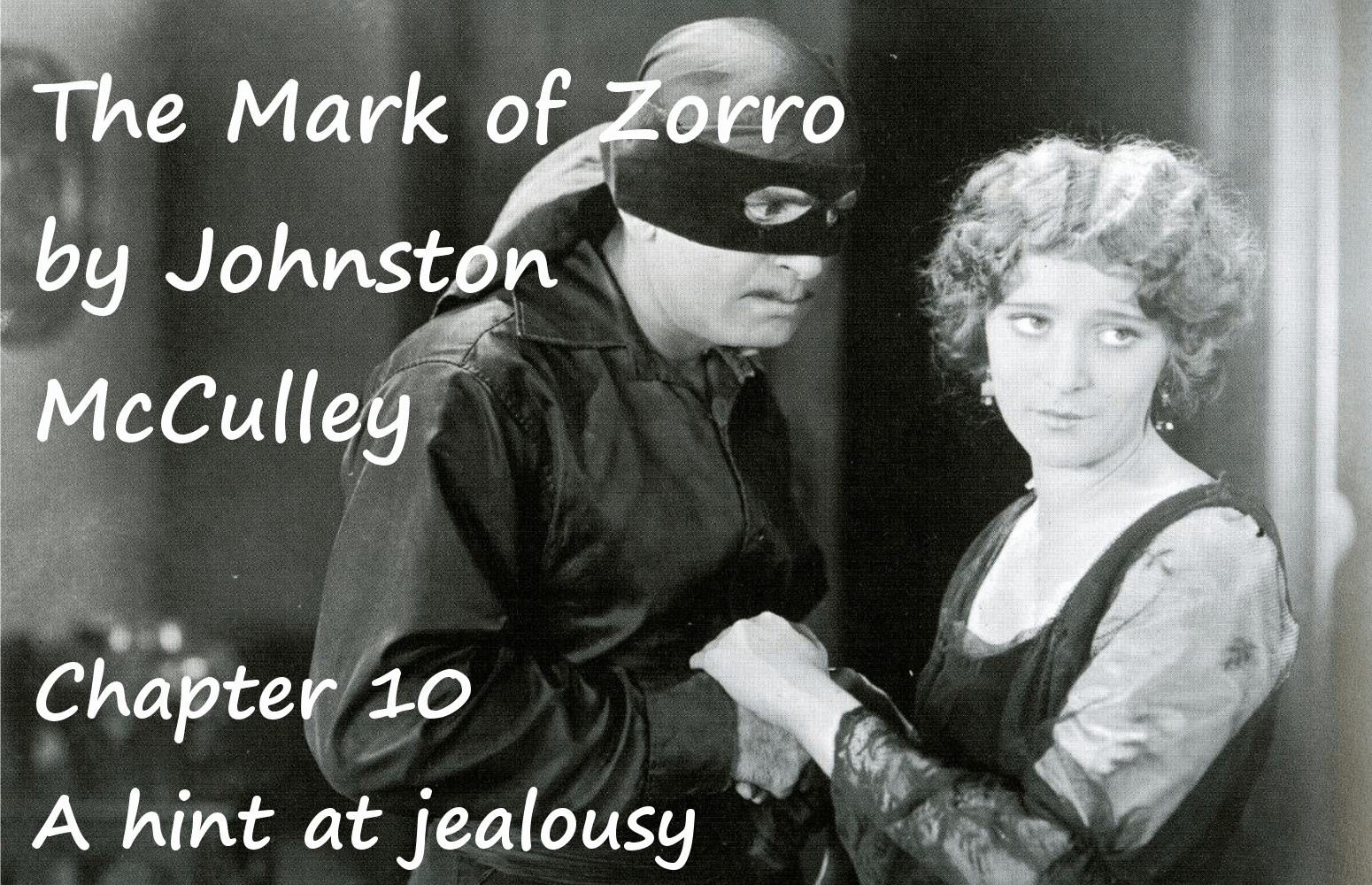 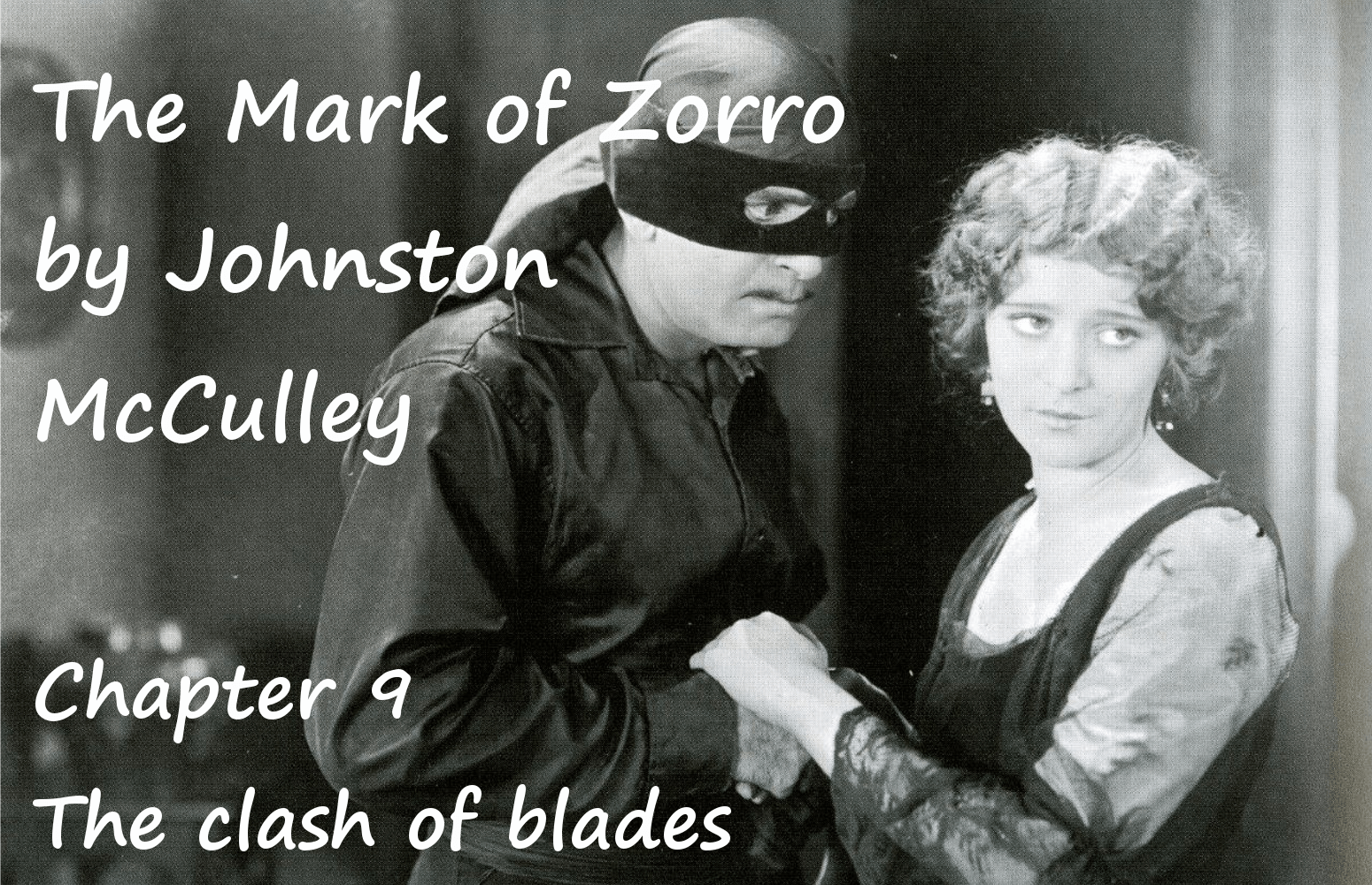 The Mark of Zorro chapter 9 The Clash of Blades