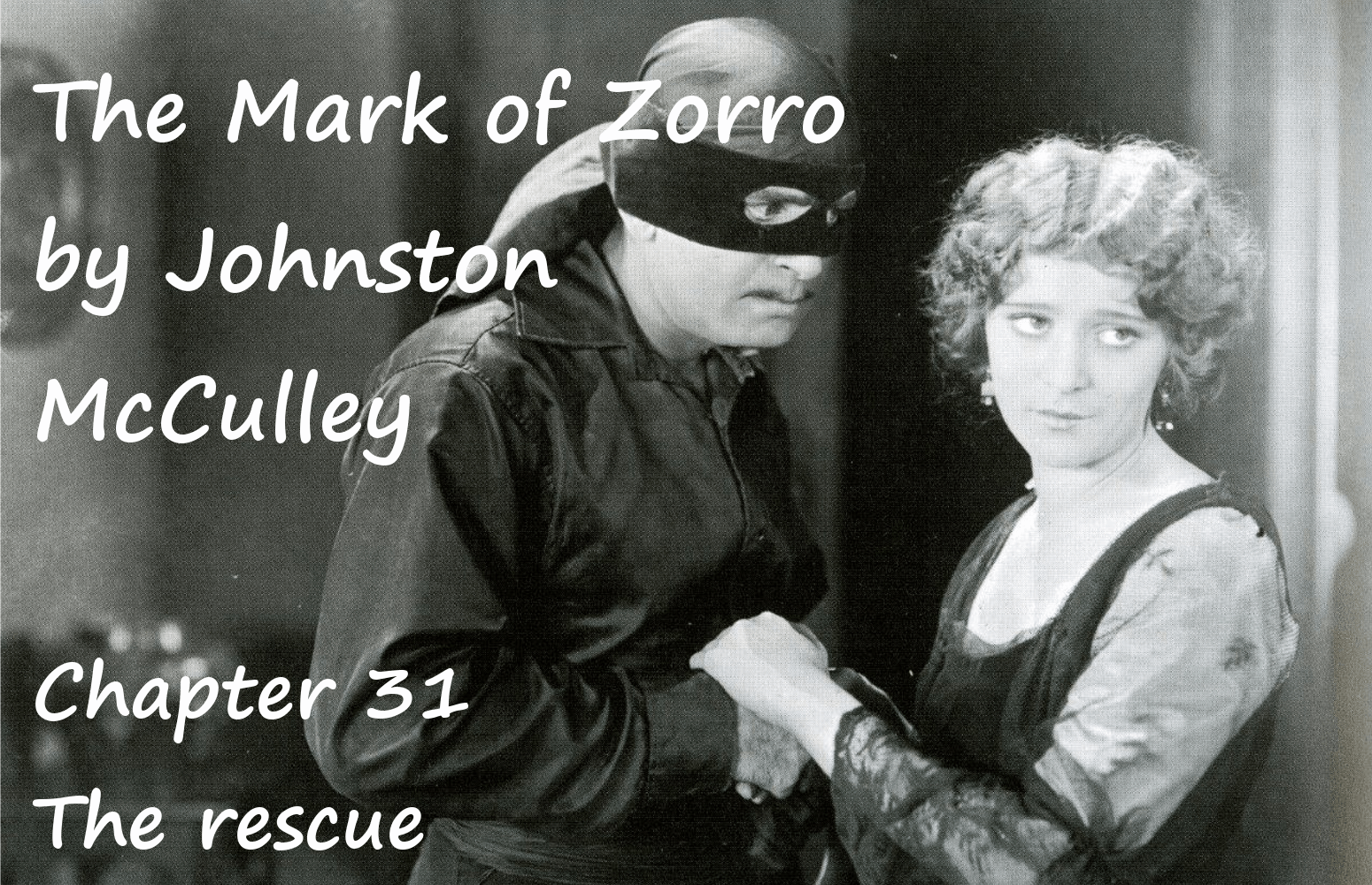 The Mark of Zorro chapter 31 The rescue
Author McCulley, Johnston, 1883-1958
Title The Mark of Zorro
Note Published serially under the title: The curse of Capistrano.
Language English
Copyright Status Public domain in the USA.

Señor Zorro knocked upon it with the hilt of his sword. They heard a man gasp inside, presently heard his steps on the stone flooring, and after a little time light showed through the cracks, and the aperture was opened, and the sleepy face of the guard appeared.

“What is wanted?” he asked.

Señor Zorro thrust the muzzle of his pistol through the aperture and into the man’s face, and in such fashion that the little door could not be closed.

“Open, if you value your life! Open—and make not the slightest sound!” Señor Zorro commanded.

“Señor Zorro is talking to you!”

“Open, fool, or you die instantly!”

“I—I’ll open the door. Do not shoot, good Señor Zorro! I am only a poor guard and not a fighting man! I pray you do not shoot!”

“As soon as I can fit key to lock, good Señor Zorro!”

They heard him rattling the keys; presently one was turned in the lock, and the heavy door was thrown open.

Señor Zorro and his four companions rushed inside, and slammed and fastened the door again. The guard found the muzzle of a pistol pressed against the side of his head, and would have knelt before these five masked and terrible men, only one of them caught him by the hair and held him up.

“Where sleeps the keeper of this infernal hole!” Señor Zorro demanded.

“And where have you put Don Carlos Pulido and his ladies?”

“In the common prison-room, señor!”

Señor Zorro motioned to the others, strode across the room, and threw open the door to the jailer’s chamber. The man already was sitting up in bed, having heard the sounds in the other room, and he blinked in fright when he beheld the highwayman by the light of the candle.

“Do not make a move, señor!” Zorro warned. “One screech, and you are a dead man! Señor Zorro confronts you!”

“May the saints preserve me—”

“Where are the keys to the prison rooms?”

Señor Zorro picked them up, and then whirled upon the jailer again and rushed toward him.

“Lie down!” he commanded. “On your face, scoundrel!”

Señor Zorro tore strips from a blanket, and bound the jailer’s hands and feet, and made a gag which he affixed.

“To escape death,” he said, then, “it is necessary for you to remain exactly as you are now, without making a sound, for some time after we have left the carcel. I shall leave it to your own judgment to decide the length of time.”

Then he hurried back into the main office, beckoned the others, and led the way down the evil-smelling hall.

“Which door?” he asked of the guard.

“The second one, señor.”

They hurried to it, and Señor Zorro unlocked it and threw it open. He forced the guard to hold a candle high above his head.

A gasp of pity came from beneath the highwayman’s mask. He saw the aged don standing by the window, saw the two women crouched on the bench, saw the vile companions they had in this miserable place.

“Now may Heaven forgive the governor!” he cried.

Señorita Lolita looked up in alarm, and then gave a glad cry. Don Carlos whirled at the highwayman’s words.

“The same, Don Carlos! I have come with some friends to rescue you!”

“I cannot allow it, señor. I shall not run away from what is in store for me. And it would avail me little to have you do the rescuing. I am accused now of harboring you, I understand. How will it look, then, if you effect my escape?”

“There is no time for argument,” Señor Zorro said. “I am not alone in this, but have twenty-six men with me. And a man of your blood, and gentle ladies such as those of your family, shall not spend an entire night in this miserable hole if we can prevent it. Caballeros!”

The last word was one of command. Two of the caballeros threw themselves upon Don Carlos, subdued him quickly, and half carried him into the hall and along it toward the office. Two others grasped the Doña Catalina by the arms, as gently as they could, and so carried her along.

Señor Zorro bowed before the señorita, and extended a hand, which she clasped gladly.

“You must trust me, señorita,” he said.

“All things have been arranged. Ask no questions, but do as I bid. Come!”

He threw an arm around her, and so led her from the prison-room, leaving the door open behind him. If some of the miserable wretches there could win through and out of the building, Señor Zorro had no wish to prevent them. More than half of them, he judged, were there because of prejudice or injustice.

Don Carlos was causing an unearthly clamor, shouting that he refused to be rescued, and that he would stay and face the governor at the trial, and show the blood that was in him. Doña Catalina was whimpering a bit because of fright, but made no resistance.

They reached the office, and Señor Zorro ordered the guard to a corner of it, with instructions to remain there quietly for some time after they had gone. And then one of the caballeros threw open the outside door.

There was a tumult outside at that moment. Two soldiers had approached with a fellow caught stealing at the tavern, and the caballeros had stopped them. One glance at the masked faces had been enough to tell the troopers that here was something wrong.

A soldier fired a pistol, and a caballero answered the fire, neither hitting the mark. But the shooting was enough to attract the attention of those in the tavern, and also of the guards at the presidio.

Troopers at the presidio were awakened immediately, and took the places of the guards while the latter mounted and spurred down the hill to ascertain the cause of the sudden tumult at that hour of the night. Sergeant Pedro Gonzales and others hurried from the tavern. Señor Zorro and his companions found themselves facing a resistance when they least expected it.

The jailer had gathered courage enough to work himself free of gag and bonds, and he shrieked through a window of his chamber that prisoners were being rescued by Señor Zorro. His shriek was understood by Sergeant Gonzales, who screeched for his men to follow him and earn a part of his excellency’s reward.

But the caballeros had their three rescued prisoners on horseback, and they spurred through the gathering throng and so dashed across the plaza and toward the highway.

Shots flew about them, but no man was hit. Don Carlos Pulido was still screaming that he refused to be rescued. Doña Catalina had fainted, for which the caballero who had her in charge was grateful, since he could give more attention to his horse and weapons.

Señor Zorro rode wildly, with the Señorita Lolita in the saddle before him. He spurred his magnificent horse ahead of all the others, and so led the way to the highroad. And when he had reached it, he pulled up his mount and watched the others come galloping to the spot, to ascertain whether there had been casualties.

“Carry out your orders, caballeros!” he commanded, when he saw that all had won through safely.

And so the band was broken into three detachments. One rushed along the Pala Road with Don Carlos. Another took the highway that would lead them to the hacienda of Don Alejandro. Señor Zorro, riding without any of his comrades at his side, galloped toward Fray Felipe’s place, the señorita&#8217;s arms clasped tightly about his neck, and the señorita&#8217;s voice in his ear.

Señor Zorro did not answer her with words, for it was not a time for speech with his enemies so close at his heels, but his arm pressed the señorita closer to him.

He had reached the crest of the first hill; and now he stopped the horse to listen for sounds of pursuit, and to watch the flickering lights far behind.

For there was a multitude of lights in the plaza now, and in all the houses, for the pueblo had been aroused. The presidio building was ablaze with light, and he could hear a trumpet being blown, and knew that every available trooper would be sent on the chase.

The sound of galloping horses came to his ears. The troopers knew in what direction the rescuers had traveled; and the pursuit would be swift and relentless, with his excellency on the scene to offer fabulous rewards and urge on his men with promises of good posts and promotion.

But one thing pleased Señor Zorro as his horse galloped down the dusty highway and the señorita clung to him and the keen wind cut into his face—he knew that the pursuit would have to be divided into three parties.

He pressed the señorita to him again, put spurs to his horse, and rode furiously through the night.

Duels of characters from Zorro movies and series 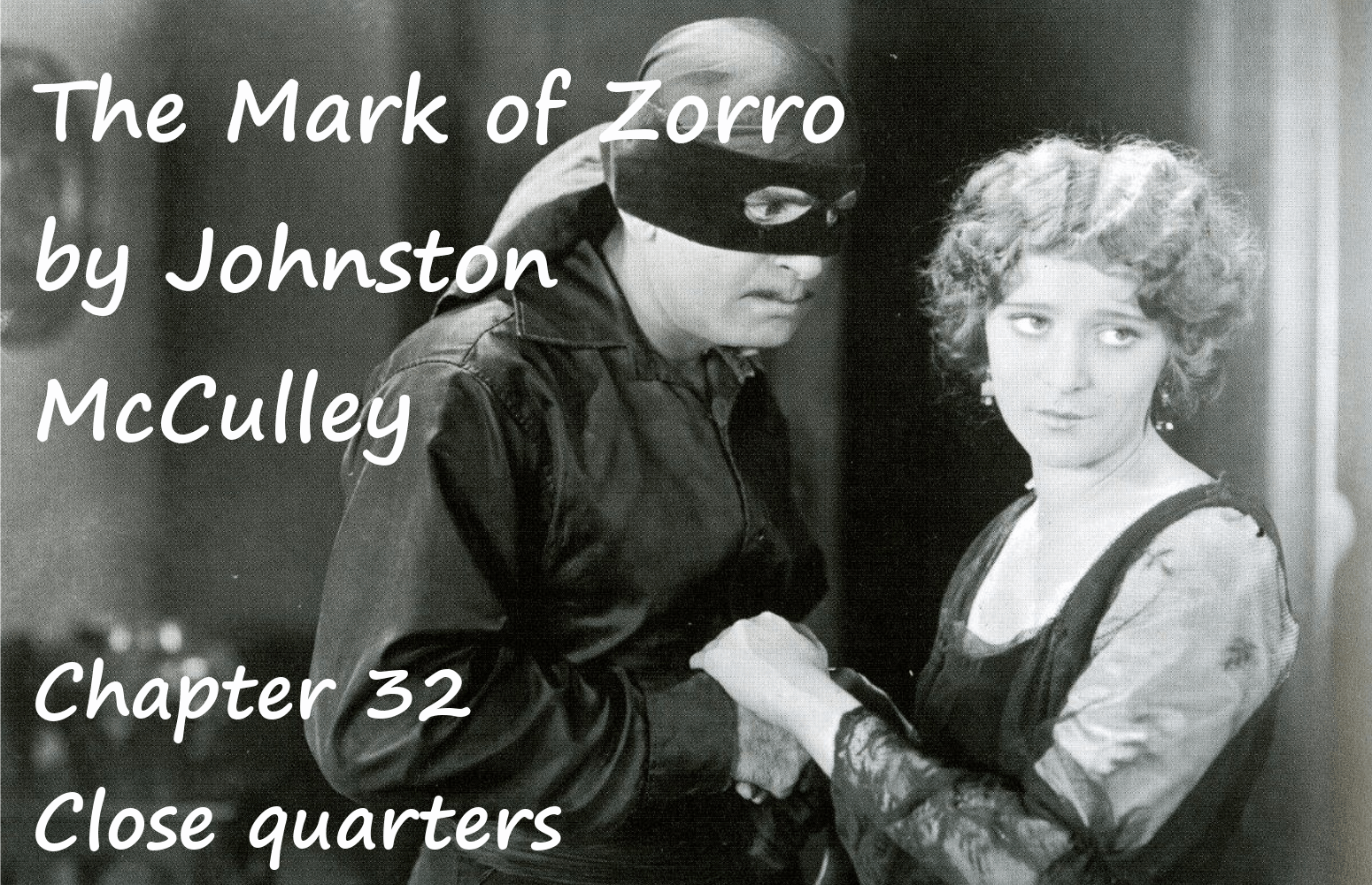 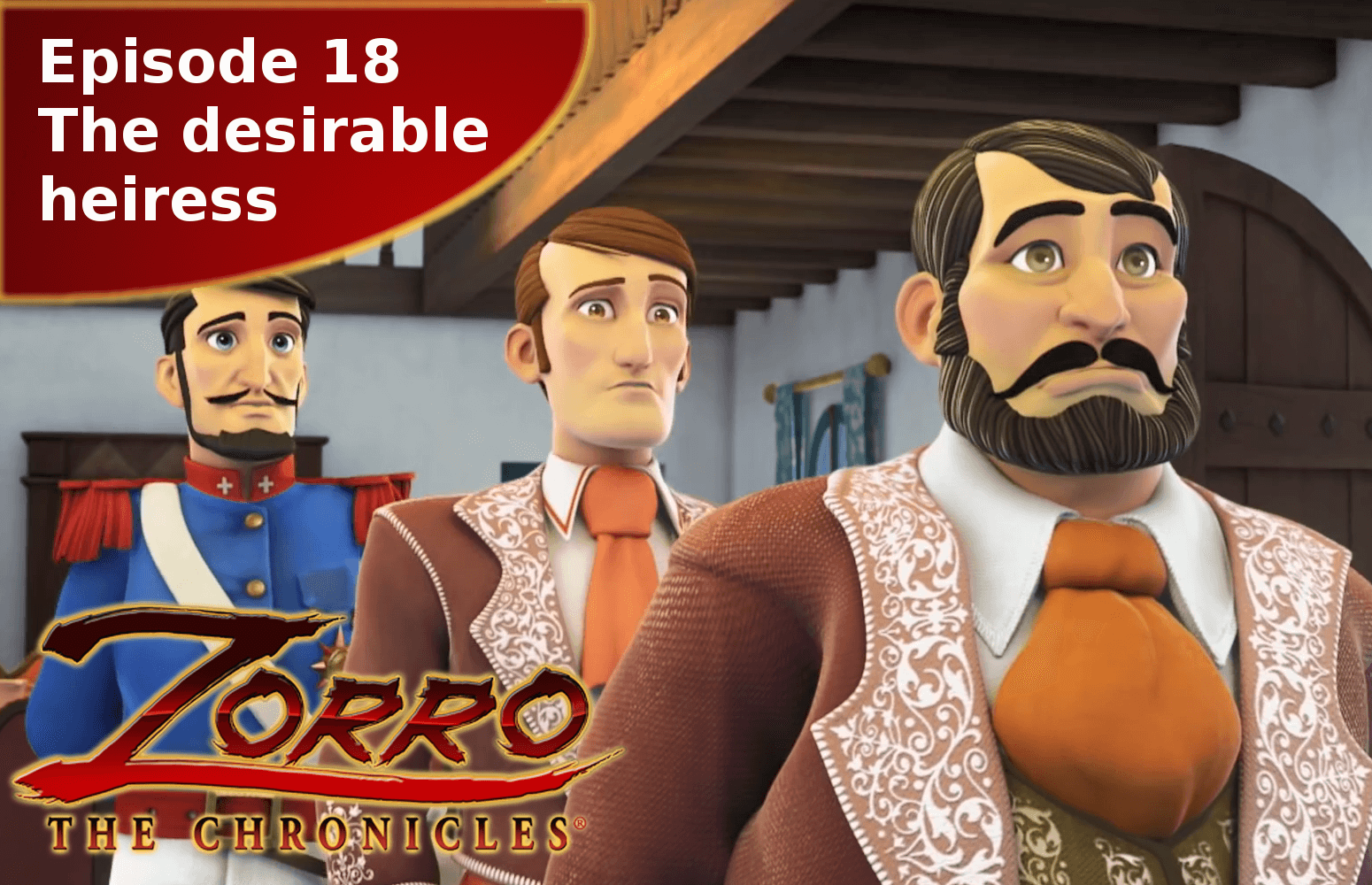