Another two months passed when one day the coachman announced that he had a letter for Victoria. She picked it up quickly and sat down at the table where Diego was sitting.

“Who is it from?” the caballero asked his enthusiastic friend. He suspected the sender was a family member but did not know which one.

“From Ramone, shh, let me read,” she replied, but she was holding the piece of paper so that Diego could also learn the news.

They both looked at each other. “That means they think Father is with me, he didn’t find them.”

Diego nodded. “Apparently. Let’s see what happened to them.”

We are very sorry that we left the city in such a way. We didn’t think straight at that time, we didn’t care about your feelings even though you tried to talk to us. We are ashamed of this and hope that you will forgive us someday.

But we decided that it would be fair to let you know what’s happening to us so that you don’t have to worry anymore.

My and Francisco’s roads have just diverged, so I write the rest of the letter myself.

After we left the pueblo, we rode a few days south. Finally, we found a guerrilla unit that we joined. I will not talk about the details, but we took part in several ambushes with the soldiers. I swear we never killed any, whether in battle or after. In our free time, we practised fencing together all day long, it really helped with our mourning.

One day, we captured a gold escort. It was a really lucky day, at least we thought so. However, there were many military prisoners and we didn’t know what to do with them. Our leader had been drinking the previous day and had still not sobered up, so he ordered to shoot all of them dead.

Victoria put the letter on the table and turned to her friend with a chalk-white face. “They couldn’t, could they? Not after the …”

Diego put his arm around her. “Easy, guesses raise doubts. We won’t know until we finish the letter. Relax, whatever is next, we go through it together, ok?”

The girl snuggled in closer, picked up the page and they continued reading.

Several privates had already been killed, but together with Francisco, we began to protest. It wasn’t a fight or self-defence, it was a cold-blooded murder. It was as evil as Mother’s execution.

Nobody listened to us until two soldiers remained. We struggled with the commander until he looked at us more closely. He asked us if we do not remember why we joined the unit, for revenge on the army who took our mother.

Fortunately, I noticed that one of the prisoners had officer tank insignia. I managed to convince the commander that he was worth more alive than dead, and we could hold two prisoners. You don’t know how relieved I was when he put the gun in his holster.

Victoria also gave a sigh of relief, and Diego added, “See, I said so. Your brothers may be crazy, but they have a conscience.”

As we saved the soldiers, they became informally our responsibility. They were tied up all the time, so we had to feed and water them. A few days later, luck turned around.

We were surprised in the camp by overwhelming military forces. In the havoc, I cut the bonds of prisoners, after all, they had the right to defend themselves, not wait to be slaughtered.

The fight was short, all guerrillas were wounded or killed. Francisco had a broken head, and I got a wound in the shoulder. Soldiers tied up the living and loaded the dead on a cart. We headed to the town, where we expected to end our days on earth. I didn’t want to die, but I thought at least I would see our Mother soon.

The young caballero noticed her trembling and saw Victoria’s tears fall from her eyes, cross her cheeks and land on his shirt. “They wrote this letter, so they survived this adventure, right?”

Senorita Escalante nodded and wiped her cheeks with her hand.

They led us to a local garrison and placed us under arrest. Every now and then a sergeant would come in and take one of the insurgents. Then we heard shots. We knew our fate but waiting was the worst. In the end, only me and Francisco remained. But no one came for us.

It was only in the evening that an officer in a gala uniform and a sergeant with dinner, a bucket of hot water and clean bandages arrived. We didn’t recognize him. He interrogated us. He wanted to know why we joined the unit, who we were and what we planned for the future. What did we have to lose?

We told him honestly about everything. He asked if he would let us go, would we be looking for another unit and would we still want to take revenge. We denied because the behaviour of our commander clearly showed that revolutionaries with ideals turned out to be a bunch of ordinary bandits.

He left us in custody overnight. It was a really long night. We no longer knew what to expect. In the morning the sergeant brought breakfast.

After an hour “our captive” came, although now the roles were reversed. We finally recognized him because he was in a regular uniform and without a hat. He handed us our pardons. That we were surprised is an understatement!

Captain Sanchez, because that’s his name, returned the same for saving his life. He confided to us that he knew how we felt because his brother got lost in life and was also killed by a firing squad.

However, as he called it, “you have a solid backbone” and offered us an invitation to join his military unit in Monterey.

So we went with him to the capital. Francisco decided to accept the offer, but I preferred to be hired as a vaquero at a hacienda 3 kilometres away. So, this is our history, I hope you will forgive the long silence and recklessness.

Both Francisco and I still have not fully accepted the death of Mother. Until we end our mourning, we won’t come to Los Angeles and home. There are too many memories. We hope that you understand that.

Please, we ask again, forgive us.

Here is my return address to the hacienda, where I work now. I will really appreciate it if you’d reply.

Victoria laughed and cried at the same time. Her crazy and stupid brothers lived and apparently had settled down in Monterey. Their adventure and proximity to death made a great impression on her, but in the end, they lived. It was a big relief to her.

See also  The Legend and the Man Part 1 To Fool the Enemy, chapter 5 epilogue

Diego stroked her back gently. “They have more luck than reason. But because Ramon finally dared to write a letter, you know what happened to them and you have a return address. Will you write?”

“Of course, I will write!” Victoria was happy and the young caballero got a kiss on the cheek.

He didn’t want to ruin his friend’s mood, but his thoughts were not overshadowed by emotions. It was clear from the letter that Senor Alfonso never found his sons and that there was no information on him. Diego was afraid that the beautiful young woman in his arms was going to have to take over the tavern permanently.

But now it was a day of joy and he intended to share only positive emotions with her. 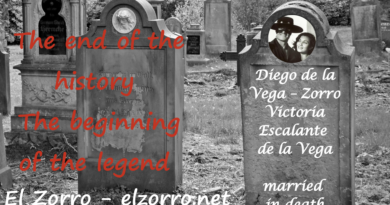 The end of the history The beginning of the legend 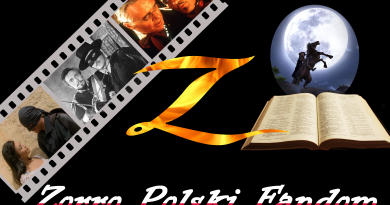