The threatened rain did not come that day, nor that night, and the following morning found the sun shining brightly, and the sky blue, and the scent of blossoms in the air.

Soon after the morning meal, the Pulido carreta was driven to the front of the house by Don Diego’s servants, and Don Carlos and his wife and daughter prepared to depart for their own hacienda.

“It desolates me,” Don Diego said at the door, “that there can be no match between the señorita and myself. What shall I say to my father?”

“Do not give up hope, caballero,” Don Carlos advised him. “Perhaps when we are home again, and Lolita contrasts our humble abode with your magnificence here, she will change her mind. A woman changes her mind, caballero, as often as she does the method of doing her hair.”

“I had thought all would be arranged before now,” Don Diego said. “You think there is still hope?”

“I trust so,” Don Carlos said, but he doubted it, remembering the look that had been in the señorita’s face. However, he intended having a serious talk with her once they were home, and possibly might decide to insist on obedience even in this matter of taking a mate.

So the usual courtesies were paid, and then the lumbering carreta was driven away, and Don Diego Vega turned back into his house with his head hanging upon his breast, as it always hung when he did himself the trouble to think.

Presently he decided that he needed companionship for the moment, and left the house to cross the plaza and enter the tavern. The fat landlord rushed to greet him, conducted him to a choice seat near a window, and fetched wine without being commanded to do so.

Don Diego spent the greater part of an hour looking through the window at the plaza, watching men and women come and go, observing the toiling natives, and now and then glancing up the trail that ran toward the San Gabriel road.

Down this trail, presently, he observed approaching two mounted men, and between their horses walked a third man, and Don Diego could see that ropes ran from this man’s waist to the saddles of the horsemen.

“What, in the name of the saints, have we here?” he exclaimed, getting up from the bench and going closer to the window.

“Ha!” said the landlord at his shoulder. “That will be the prisoner coming now.”

“Prisoner?” said Don Diego, looking at him with a question in his glance.

“A native brought the news a short time ago, caballero. Once more a fray is in the toils.”

“The man is to go before the magistrado immediately for his trial. They say that he swindled a dealer in hides, and now must pay the penalty. He wished his trial at San Gabriel, but that was not allowed, since all there are in favor of the missions and the frailes.”

“Who is the man?” Don Diego asked.

“He is called Fray Felipe, caballero.”

“What is this? Fray Felipe is an old man, and my good friend. I spent night before the last with him at the hacienda he manages.”

“No doubt he has imposed upon you, caballero, as upon others,” the landlord said.

Don Diego showed some slight interest now. He walked briskly from the tavern and went to the office of the magistrado in a little adobe building on the opposite side of the plaza. The horsemen were just arriving with their prisoner. They were two soldiers who had been stationed at San Gabriel, the frailes having been forced to give them bed and board in the governor’s name.

It was Fray Felipe. He had been forced to walk the entire distance fastened to the saddles of his guards, and there were indications that the horsemen had galloped now and then to test the fray’s powers of endurance.

Fray Felipe’s gown was almost in rags, and was covered with dust and perspiration. Those who crowded around him now gave him jeers and coarse jests, but the fray held his head proudly and pretended not to see or hear them.

The soldiers dismounted and forced him into the magistrado’s office, and the loiterers and natives crowded forward and through the door. Don Diego hesitated a moment, and then stepped toward the door. “One side, scum!” he cried; and the natives gave way before him.

He entered and pressed through the throng. The magistrado saw him and beckoned him to a front seat. But Don Diego did not care to sit at that time.

“What is this we have here?” he demanded. “This is Fray Felipe, a godly man and my friend.”

“He is a swindler,” one of the soldiers retorted.

“If he is, then we can put our trust in no man,” Don Diego observed.

“All this is quite irregular, caballero,” the magistrado insisted, stepping forward. “The charges have been preferred, and the man is here to be tried.”

Then Don Diego sat down and court was convened.

The man who made the complaint was an evil-looking fellow who explained that he was a dealer in tallow and hides, and had a warehouse in San Gabriel.

“I went to the hacienda this fray manages and purchased ten hides of him,” he testified. “After giving him the coins in payment and taking them to my storehouse, I found that the hides had not been cured properly. In fact, they were ruined. I returned to the hacienda and told the fray as much, demanding that he return the money, which he refused to do.”

“The hides were good,” Fray Felipe put in. “I told him I would return the money when he returned the hides.”

“They were spoiled,” the dealer declared. “My assistant here will testify as much. They caused a stench, and I had them burned immediately.”

The assistant testified as much.

“Have you anything to say, fray?” the magistrado asked.

“It will avail me nothing,” Fray Felipe said. “I already am found guilty and sentenced! Were I a follower of a licentious governor instead of a robed Franciscan, the hides would have been good.”

“You speak treason?” the magistrado cried.

The magistrado puckered his lips and frowned.

“There has been entirely too much of this swindling,” he said finally. “Because a man wears a robe he cannot rob with impunity. In this case, I deem it proper to make an example, that frailes will see they cannot take advantage of their calling. 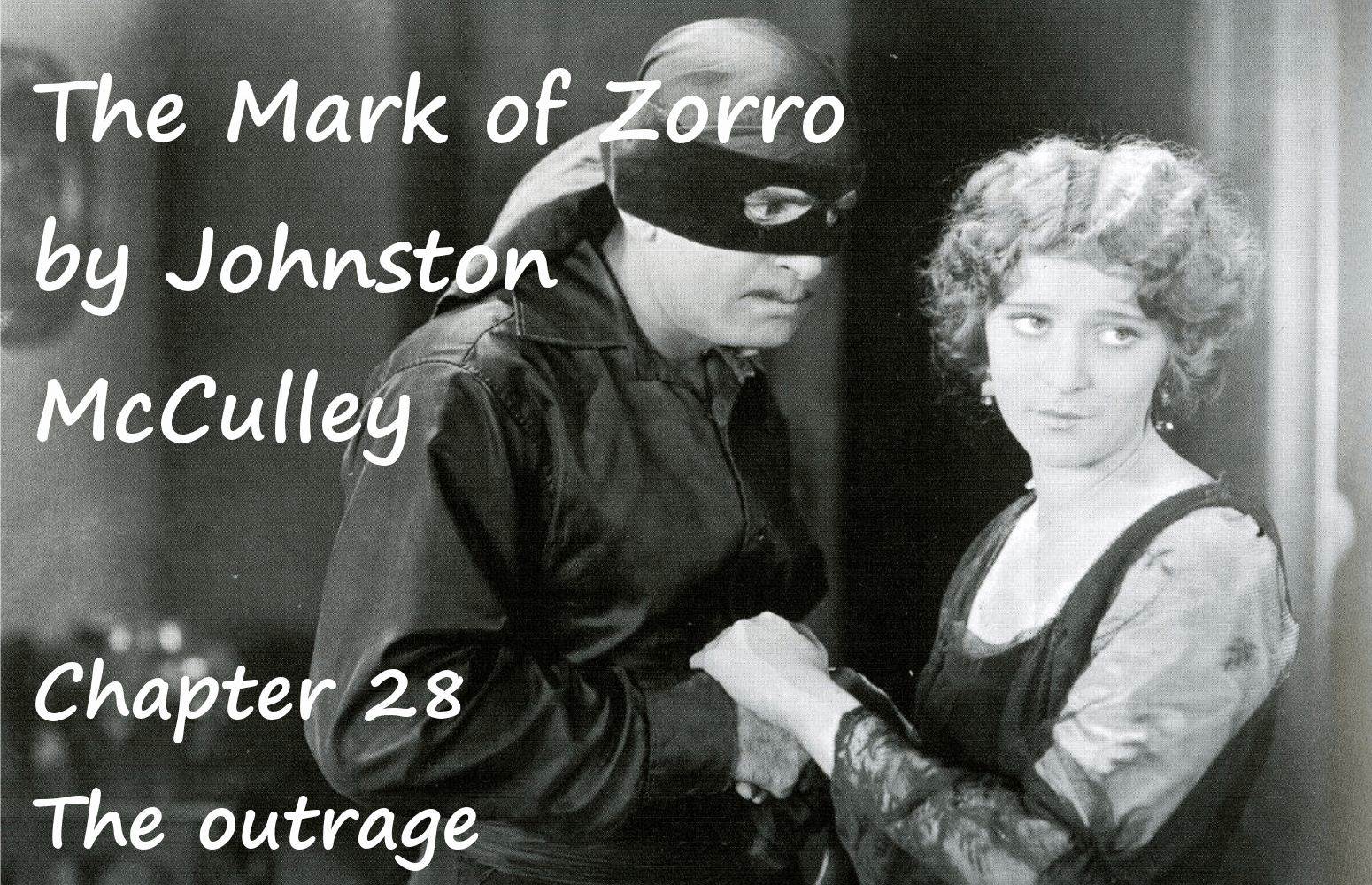 The Mark of Zorro chapter 28 The outrage

The best duels in cinema history