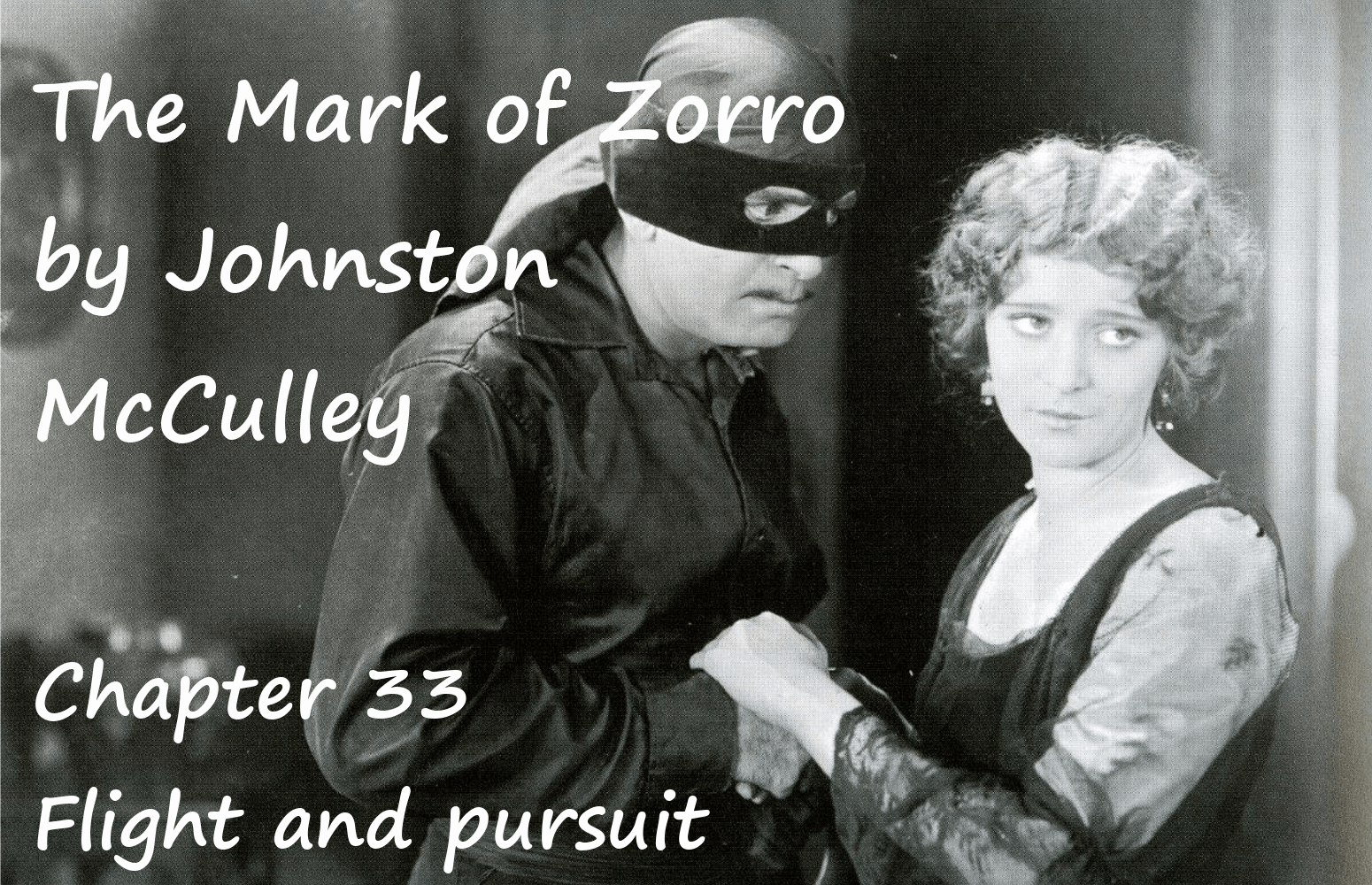 The Mark of Zorro chapter 33 Flight and pursuit
Author McCulley, Johnston, 1883-1958
Title The Mark of Zorro
Note Published serially under the title: The curse of Capistrano.
Language English
Copyright Status Public domain in the USA.

That the determined pursuit of Señor Zorro and his band of caballeros from the carcel had been taken up so quickly was due to Sergeant Pedro Gonzales.

Sergeant Gonzales had heard the shots, and had rushed from the tavern with the other troopers at his heels, glad of an excuse to escape without paying for the wine he had ordered. He had heard the shout of the jailer, and had understood it, and immediately had grasped the situation.

“Señor Zorro is rescuing the prisoners!” he screeched. “The highwayman is in our midst again! To horse, troopers, and after him! There is a reward—”

They knew all about the reward, especially the members of the governor’s bodyguard, who had heard his excellency rave at mention of the highwayman’s name and declare he would make a captain of the trooper who captured him or brought in his carcass.

They rushed for their horses, swung themselves into their saddles, and dashed across the plaza toward the carcel with Sergeant Gonzales at their head.

They saw the masked caballeros galloping across the plaza, and Sergeant Gonzales rubbed his eyes with the back of one hand and swore softly that he had been taking too much wine. He had lied so often about Señor Zorro having a band of men at his back, that here was the band materialized out of his falsehoods.

When the caballeros split into three detachments, Sergeant Gonzales and his troopers were so near them that they observed the maneuver. Gonzales quickly made three troops of the men who followed him, and sent a troop after each band.

He saw the leader of the caballeros turn toward San Gabriel, he recognized the leap of the great horse the highwayman rode, and he took after Señor Zorro with an exultant heart, being of a mind to capture or slay the highwayman rather than to retake any of the rescued prisoners. For Sergeant Pedro Gonzales had not forgotten the time Señor Zorro had played with him in the tavern at Reina de Los Angeles, nor had he given up the idea of taking his vengeance for it.

He had seen Señor Zorro’s horse run before, and he wondered a bit now because the highwayman was not putting greater distance between himself and his pursuers. And Sergeant Gonzales guessed the reason—that Señor Zorro had Señorita Lolita Pulido on the saddle before him and was carrying her away.

Gonzales was in the lead, and now and then he turned his head and shouted orders and encouragement to his troopers. The miles flew beneath them, and Gonzales was glad because he was keeping Señor Zorro in sight.

See also  The Mark of Zorro chapter 38 The man unmasked

“To Fray Felipe’s—that is where he is riding!” Gonzales told himself. “I knew that old fray was in league with the bandit! In some manner he tricked me when I sought this Señor Zorro at his hacienda before. Perhaps this highwayman has a clever hiding-place there. Ha! By the saints, I shall not be tricked again!”

On they rode, now and then catching glimpses of the man they pursued, and always in the minds of Gonzales and his troopers were thoughts of the reward and promotion a capture would mean. Their horses were beginning to show some fatigue already, but they did not spare the animals.

They saw Señor Zorro turn into the driveway that led to Fray Felipe’s house; and Sergeant Gonzales chuckled low down in his throat because he felt that he had guessed correctly.

He had the highwayman now! If Señor Zorro continued to ride, he could be seen and followed because of the bright moonlight; if he stopped, Señor Zorro could not hope to cope successfully with half a score of troopers with Gonzales at their head.

They dashed up to the front of the house and started to surround it. They saw Señor Zorro’s horse. And then they saw the highwayman himself, and Gonzales cursed because half a dozen troopers were between him and his prey, and were at him with their swords, threatening to end the business before Gonzales could reach the scene.

He tried to force his horse into the fight. He saw Señor Zorro spring into a saddle and dash away, and the troopers after him. Gonzales, not being close, gave his attention to the other half of his duty—he bade some of his soldiers surround the house so that none could leave it.

Then he saw Señor Zorro take the stone fence, and started in pursuit, all except the guards around the house joining him. But Sergeant Gonzales went only as far as the crest of the first hill. He noticed how the highwayman’s horse was running, and realized that he could not be overtaken. Perhaps the sergeant could gain some glory if he returned to Fray Felipe’s house and recaptured the señorita.

The house was still being guarded when he dismounted before it, and his men reported that none had attempted to leave the building. He called two of his men to his side, and knocked on the door. Almost instantly, it was opened by Fray Felipe.

“Are you just from bed, fray?” Gonzales asked.

“Is it not a time of night for honest men to be abed?” Fray Felipe asked in turn.

“It is, fray—yet we find you out of it. How does it happen that you have not come from the house before? Did we not make enough noise to awaken you?”

“I heard sounds of combat—”

“And you may hear more, fray, else feel the sting of a whip again, unless you answer questions swiftly and to the point. Do you deny that Señor Zorro has been here?”

“Ha! Now we have it! You admit, then, that you are in league with this pretty highwayman, that you shield him upon occasion? You admit that, fray?”

“I admit nothing of the sort!” Fray Felipe replied. “I never set my eyes on this Señor Zorro, to my knowledge, until a very few minutes ago.”

“That is a likely story! Tell it to the stupid natives! But do not try to tell it to a wise trooper, fray! What did this Señor Zorro wish?”

“You were so close upon the man’s heels, señor, that he scarce had time to wish for anything,” Fray Felipe said.

“Yet you had some speech with him?”

“I opened the door at his knock, señor, the same as I opened it at yours.”

“That soldiers were pursuing him.”

“And he asked that you hide him, so he could escape capture at our hands?”

“Wanted a fresh horse, did he?”

“He did not say as much, señor. If he is such a thief as he is painted, undoubtedly he would merely have taken a horse without asking, had he wanted it.”

“Ha! What business had he with you, then? It would be well for you to answer openly, fray!”

“Did I say that he had business with me?”

“The saints are better off your lips, señor—boaster and drunkard!”

“Do you wish to receive another beating, fray? I am riding on his excellency’s business. Do not you delay me further! What said this pretty highwayman?”

“Nothing that I am at liberty to repeat to you, señor,” Fray Felipe said.

Sergeant Gonzales pushed him aside roughly and entered the living-room, and his two troopers followed at his heels.

“Light the candelero!” Gonzales commanded his men. “Take candles, if you can find any. We search the house!”

“I expect to find the piece of merchandise this pretty Señor Zorro left here, fray.”

“What do you imagine he left?”

“Ha! A package of clothing, I suppose! A bundle of loot! A bottle of wine! A saddle to be mended! What would the fellow leave, fray? One thing impresses me—Señor Zorro’s horse carried double when he arrived at your house, and was carrying none but Señor Zorro when he departed.”

“And you expect to find—”

“The other half of the horse’s load,” replied Gonzales. “Failing to find it, we may try a twist or two of your arm to see whether you can be made to speak.”

“Meal mush and goat’s milk!” quoth Sergeant Gonzales. “You fooled me once in some manner, but you will not so fool me again. Search the house, troopers, and be sure that you search it well! I shall remain in this room and keep this entertaining fray company. I shall endeavor to discover what his sensations were while he was being whipped for swindling.”

“Coward and brute!” Fray Felipe thundered. “There may come a day when persecution shall cease.”

“When this disorder shall end and honest men be given their just dues!” Fray Felipe cried. “When those who have founded a rich empire here shall receive the true fruits of their labor and daring instead of having them stolen by dishonest politicians and men who stand in their favor!”

“When there shall be a thousand Señor Zorros, and more if necessary, to ride up and down El Camino Real and punish those who do wrong! Sometimes I would that I were not a fray, that I might play such a game myself!”

“We’d run you down in short order and stretch a rope with your weight,” Sergeant Gonzales told him. “Did you help his excellency’s soldiers more, perhaps his excellency would treat you with more consideration.”

“I give aid to no spawn of the devil!” Fray Felipe said.

“Ha! Now you grow angry, and that is against your principles! Is it not the part of a robed fray to receive what comes his way and give thanks for it, no matter how much it chokes him? Answer me that, angry one!”

“You have about as much knowledge of a Franciscan’s principles and duties as has the horse you ride!”

“I ride a wise horse, a noble animal. He comes when I call and gallops when I command. Do not deride him until you ride him. Ha! An excellent jest!” 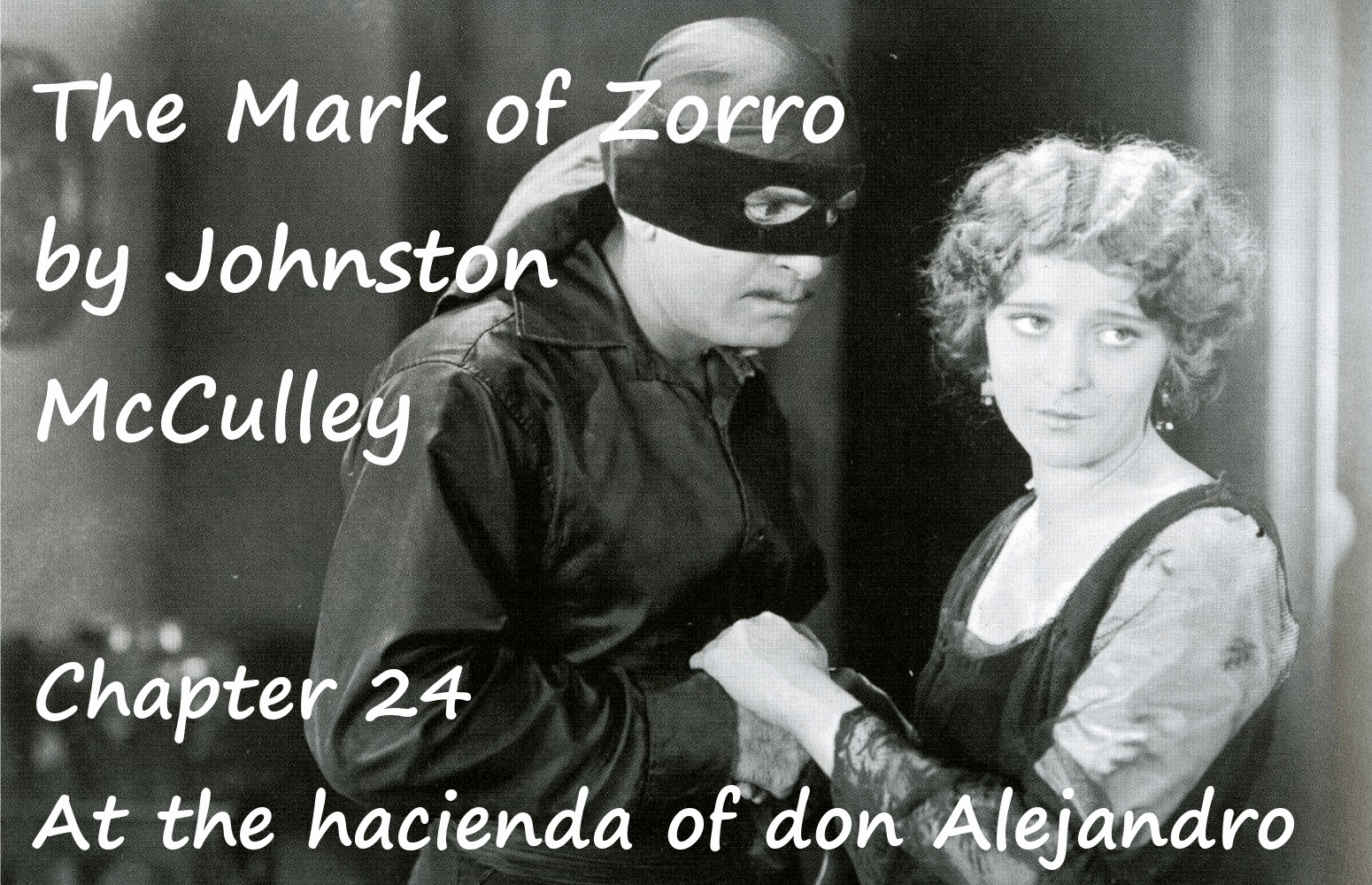 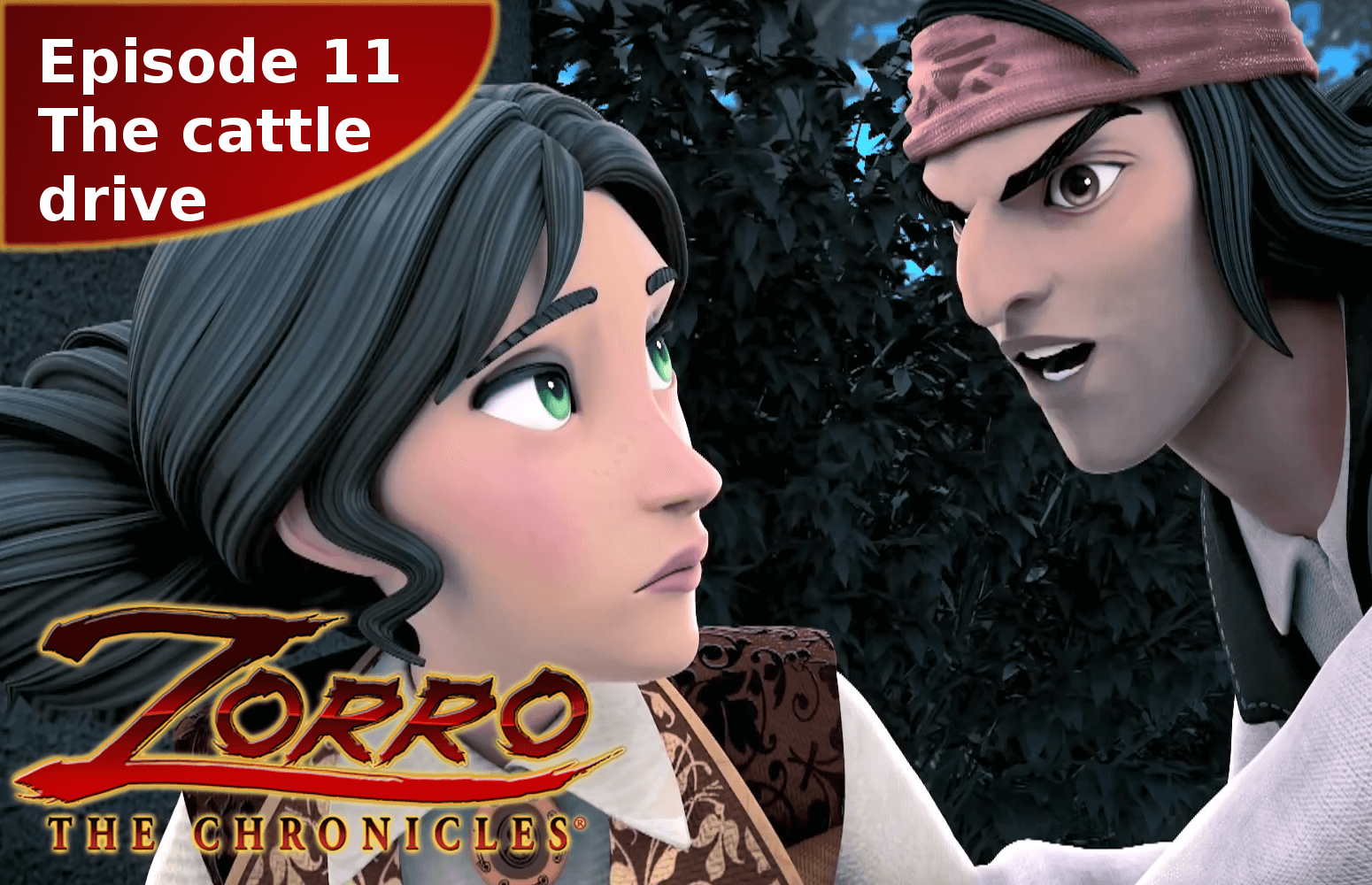 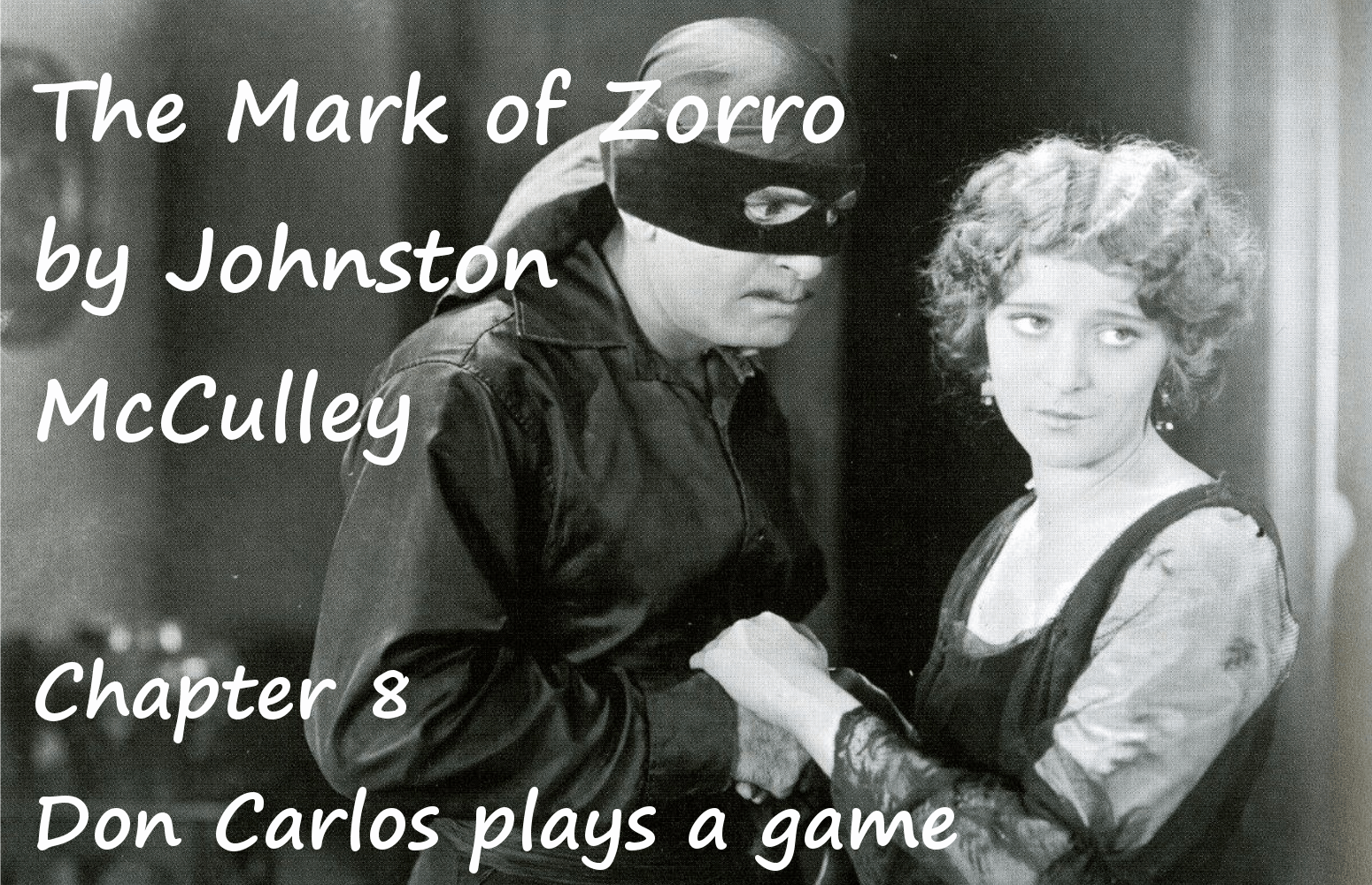 The Mark of Zorro chapter 8 Don Carlos plays a game