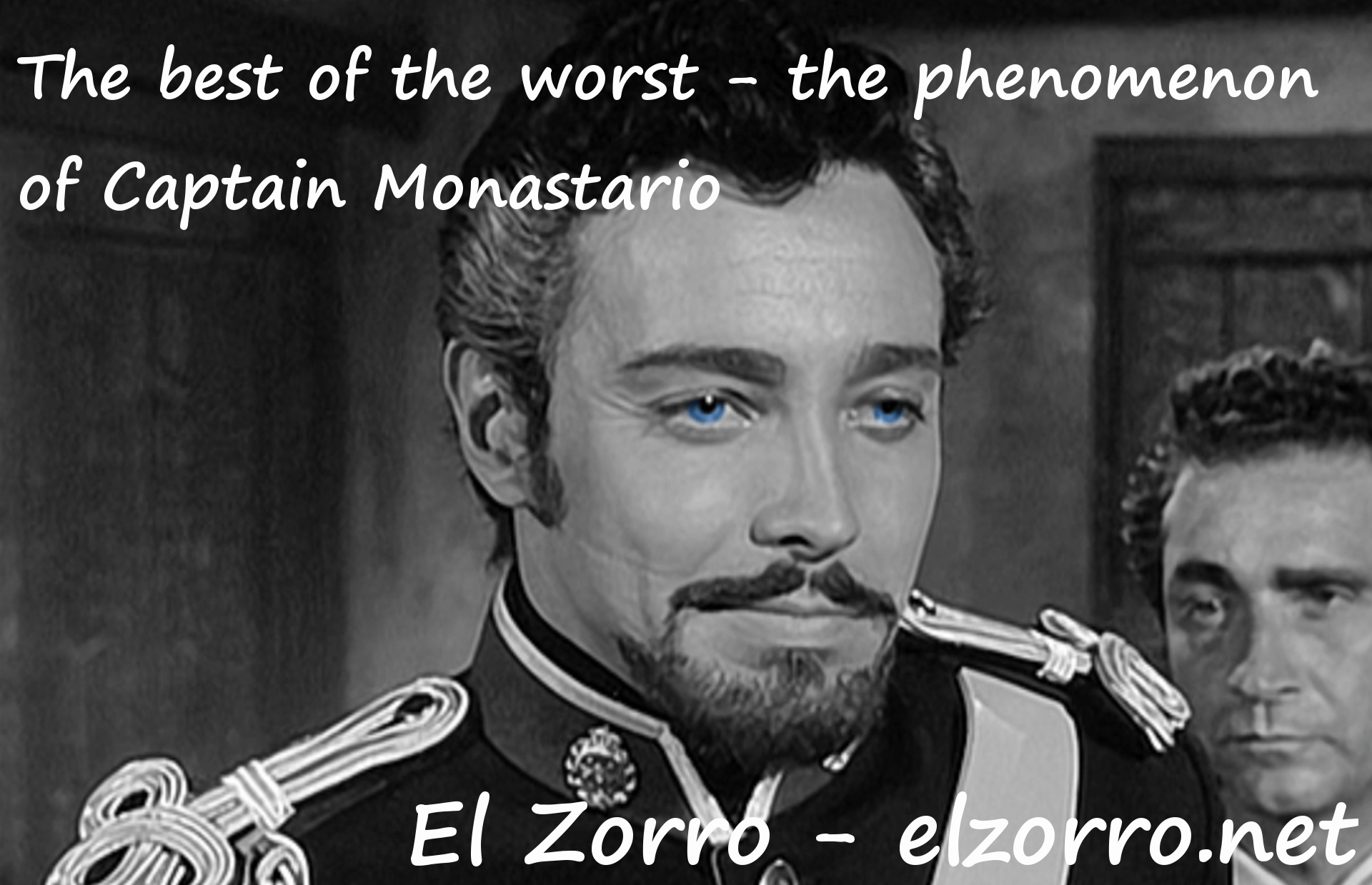 He appeared in only thirteen episodes of Walt Disney Zorro out of eighty two. Although he was just one of many antagonists, he remained the first and the most competent one. Moreover, he has become a sort of a benchmark for every other villain that came to the series after him. Not all of them have managed to reach that standard. What makes capitán Enrique Sanchez Monastario so memorable?

From Zorro to the comandante

Britt Lomond, who played the role of the evil captain, went to the casting because he wanted to get the role of… Zorro. Such casting choice was supported by Walt Disney, the producer himself. The director Norman Foster had a different idea, though. Guy Williams was his perfect Diego and he saw Lomond fit for the role of Monastario. Slightly disappointed, Britt decided then:

I’m gonna make this son of a gun so you’ll never forget him. He’s gonna be evil, he’s gonna have humor. He’s gonna have all the little nuances and colors that I think I can paint into this character.

We can all probably agree that he has achieved his aim.

The nuances and colors of Enrique Monastario

‘The rancheros are being taxed out of existence. Those who cannot pay are flogged and thrown into prison. The Indians are torn from their families and forced into slave labor. All for the benefit of one man – capitán Monastario.’

‘Gentleman?! Ha! He is a black-hearted scoundrel. If he remains in power, our country faces ruin.’

Britt Lomond succeeded. Monastario is a scoundrel when he needs to lure Torres out of his hideout or punish the peons that laugh at the comandante. But when he greets a lady or a highly-born official, he can be a gentleman to such extent that we may wonder if the capitán himself doesn’t come from a noble family. His intrigue with freeing Torres and then intending to shoot him during “attempting to escape”, or fighting a wounded don Alejandro shows the comandante’s mean and tenacious side. Yet it’s hard not to appreciate his shrewdness and creativity when he delays judge Vasca hurrying for the trial or uses Indian to pointless work in order to make Torres give himself up. Moreover, it proves that the capitán is familiar with the weaknesses of his opponents. And he knows how to use them. Monastario is a really great strategist.

There’s no doubt that the capitán does mean and cruel things. The worst is probably letting Martinez kill a man in front of him, so he can blackmail the criminal and use him for his intrigues. With his hands the comandante soils Zorro’s reputation, stealing from the dons and even the church! The latter was indeed an unthinkable crime at that time. Martinez himself felt very unsure about committing it.

Some point out that Monastario oppresses Indians. Here I’d like to draw attention to the fact that the capitán is the product of the times he was born in. Such treatment of the Indians by a white European would have been considered not as a cruelty, but as a norm during the time period when the action of Zorro takes place. Diego, who defends the Indians, is remarkable and written from a modern perspective. Monastario’s behaviour may shock today, but in XIX century it wouldn’t have scandalised anyone. The same goes for trying to marry Elena Torres in order to gain her fortune. It clearly wasn’t the most romantic thing in the world, but again: we talk about times when marriage was supposed to be a good deal.

Only once Monastario does something completely unfitting for his times. He behaves in a very modern way when he arrests the wife and daughter of Torres. The whole neighbourhood is outraged at the very idea of putting the women in jail, and poor Monastario is just trying to introduce the concept of men and women equality! Maybe he should have taken a different approach, right. But well… he tried, didn’t he?

The end justifies the means

Nothing shall stop me from being the richest man in all of California.

We should remember that while being mean, Monastario isn’t a sadist. He doesn’t do evil stuff because watching the suffering of others gives him pleasure. The capitán always has his own goal: becoming rich, reasserting his power, or catching a criminal. And frankly speaking, these aims aren’t that bad. It’s the way the comandante chooses to achieve them that is wrong. But the fact that he has them, and that they are dream understandable for the majority of people, makes him more believable. Instead of some unrealistic incarnation of evil straight from a fairy tale, we get an overambitious plotter who has gone too far. It’s so true and real. And I dare say that it’s easier for me to believe in a greedy careerist Monastario than a selfless idealist Diego.

Monastario’s intelligence, shrewdness and defective moral compass makes him a real challenge for Zorro. Let’s add great strategic and fencing skills to that, and it’s easy to understand why he’s such a demanding opponent. Honestly, the majority of the comandante’s plans fail because his subordinates are incompetent, naive and ineffective. Or because Zorro is very lucky.

See also  Zorro the Chronicles episode 2 The mine

We all remember the episode when Monastario shots don Alejandro and then deliberately tries to finish him in a fight. Diego had all reasons to be afraid for his father’s life then, especially since the comandante was acute enough to organise him a hacienda arrest. (And who failed to guard de la Vega? Garcia, obviously. Baboso!). Or the second episode, when Monastario rides around and tells the inhabitants to try on the Zorro costume. Do you recall this fear in Diego’s eyes when he saw the capitán just outside his home, with a black mask in his hands? It gave me chills as well!

And finally, cherry on top! Enrique Sanchez Monastario remains the only villain in the Walt Disney series who correctly deduced Zorro’s identity. If it wasn’t for Diego’s friendship with the viceroy, who refused to believe that his son’s companion can be a bandit, as well as Bernardo’s miraculous intervention, the story would have ended with the thirteenth episode. And with the triumph of the Main Villain. It’s a little sad, you know, that Monastario was indeed right, yet no-one wanted to believe him. Even worse – he got arrested! Tell me now, is there any justice in this world? No. No, there isn’t.

(There’s karma. But there’s no justice.)

‘Look at me, sergeant. You find me attractive?’

‘If I was a woman and fat like this, I wouldn’t be particular.’

What the sergeant couldn’t appreciate, the fanmail has confirmed. Some claim that Britt got even more letters from the admirers than Guy Williams, which was supposedly the reason why he was written out of the series after thirteen episodes. Deeming Monastario handsome is purely a matter of taste. However, it’s hard to deny that the capitán is incredibly elegant, well-groomed and dressed in the prettiest uniform. This pleasing to the eye picture is completed by a cunning, slightly arrogant half-smile and beautiful blue eyes. Those eyes shine as brightly as the stars every time their owner  comes up with a new scheme.

One of the adjectives used by the fans to describe Monastario I came across quite often is “adorable”. Can you imagine how angry he would be if he only heard it? I almost see him, tightening his fists with fury. It’s very interesting that this epithet doesn’t clash with the fact that the capitán is, after all, a villain! (And a black-hearted scoundrel, adds don Alejandro helpfully.)  I’ve been pondering about it for a while and have come to the conclusion that Monastario’s ways of expressing himself are the main reason here.

Pay attention how vividly the comandante gets irritated. How he is beside himself while shouting yet another order and witnessing his subordinates fail again. Or how he sits with them on the side of the road, devastated and discouraged with their incompetence. How deeply hurt his pride is after every mockery made by Zorro. When he comes up with a new scheme to catch the renegade, he’s as excited as a child waiting for Christmas presents. Such an expressive, authentic, understandable way of showing emotions makes the capitán not only more real, but also, well, adorable.

He didn’t manage to become the richest man in all of California or defeat Zorro. Nevertheless, he became the most liked and appreciated villain in the series. With only thirteen episodes for his use, Britt Lomond created a character almost as memorable and characteristic as Zorro himself. We can encounter Monastario in comic books and novels about the Fox. Captain Monasterio, the main antagonist from “Zorro the Chronicles”, is based on him. Fans enjoy writing about him in their fanfiction stories. In some of them he remains a black-hearted tyrant, in others he changes, falls in love, and even cooperates with Diego!

Lomond once admitted that he admired Basil Rathbone who played captain Esteban Pasquale in 1940 “The Mark of Zorro”.

Basil was great. I hope I was half as good.

After watching this indeed great movie, I can say with all honesty: Britt, you couldn’t be more wrong. You were much better. 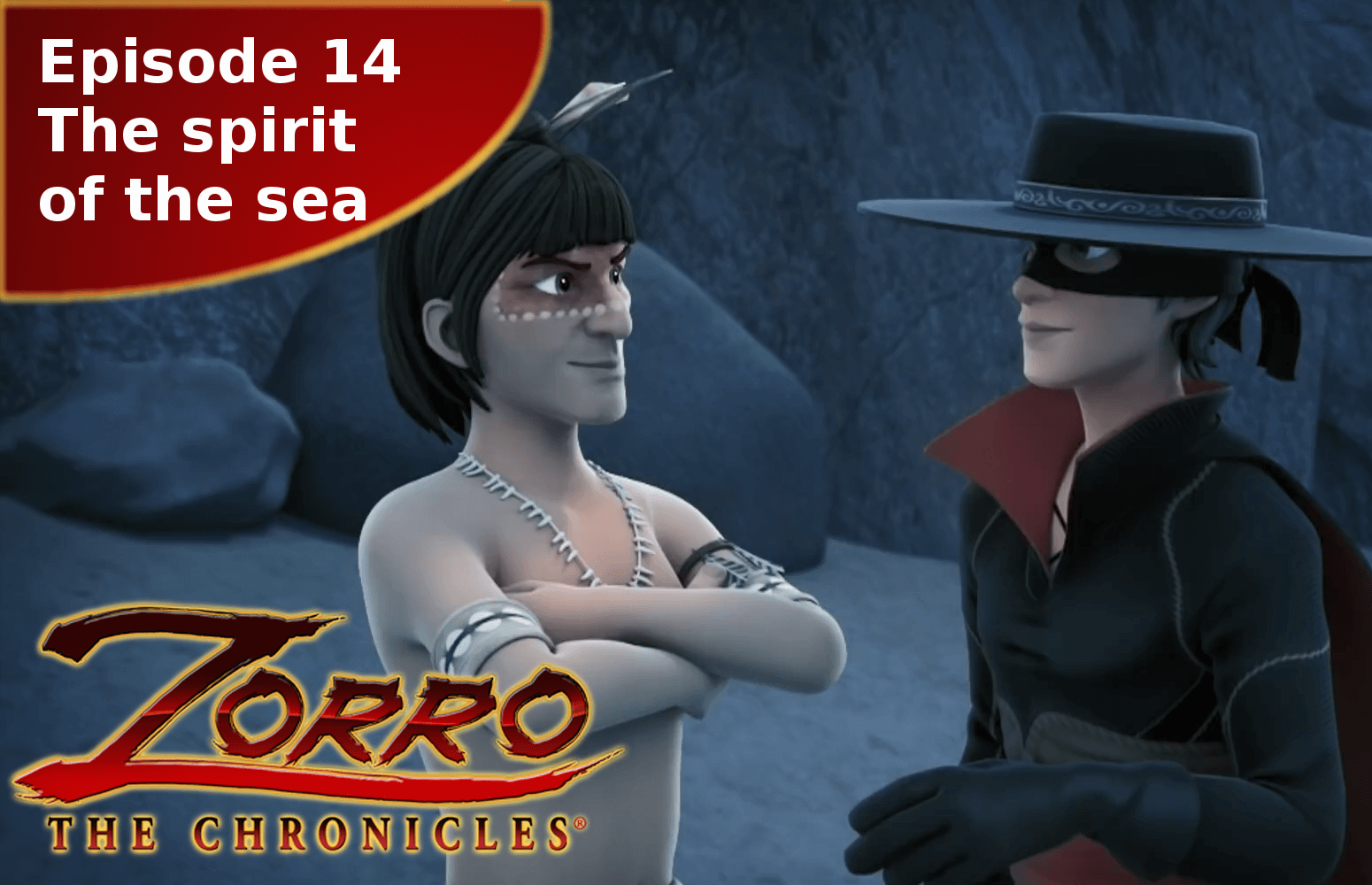 Zorro the Chronicles episode 14 The spirit of the sea 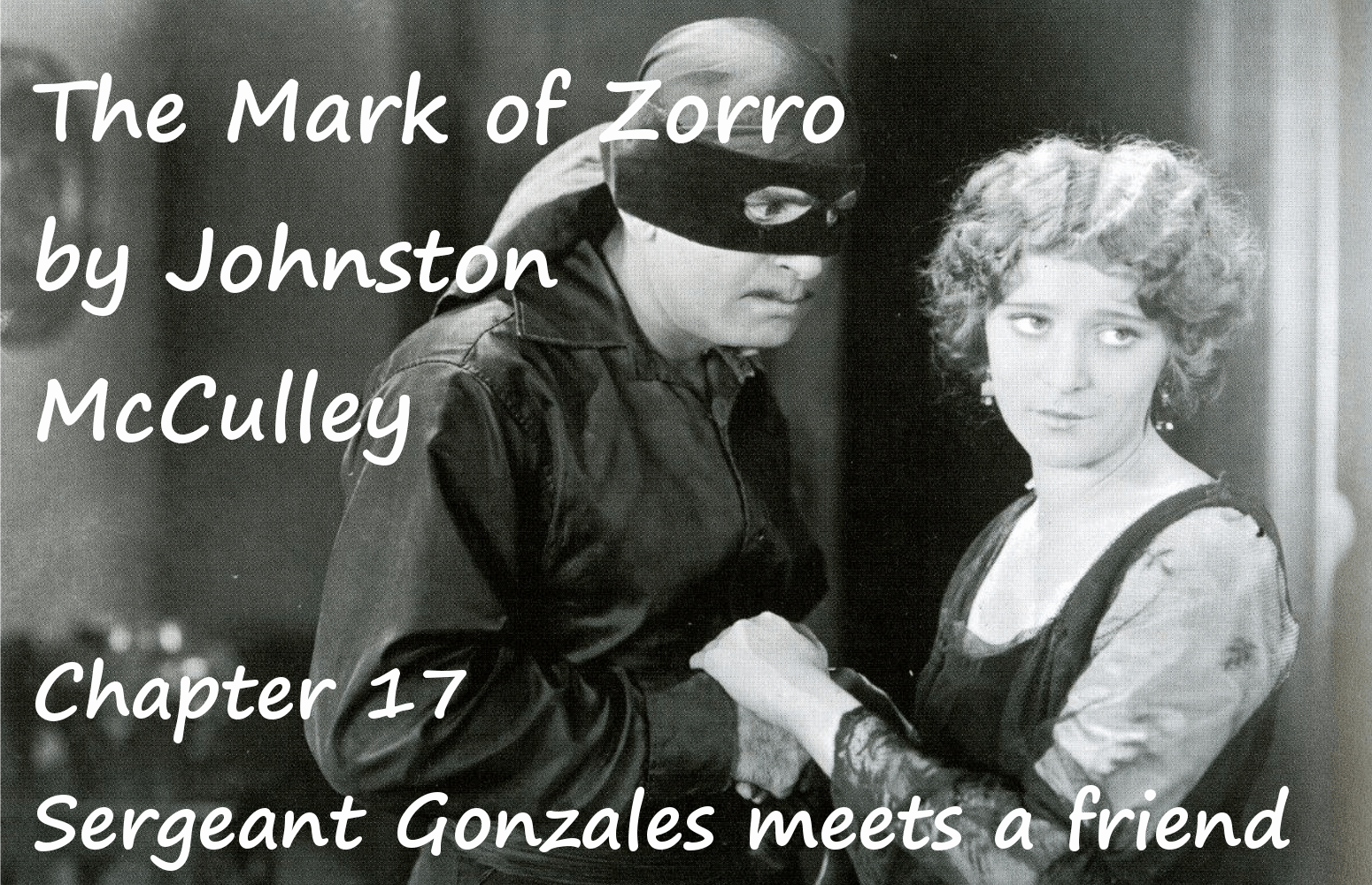 2 thoughts on “The Best of the Worst. The Phenomenon of Capitán Monastario”