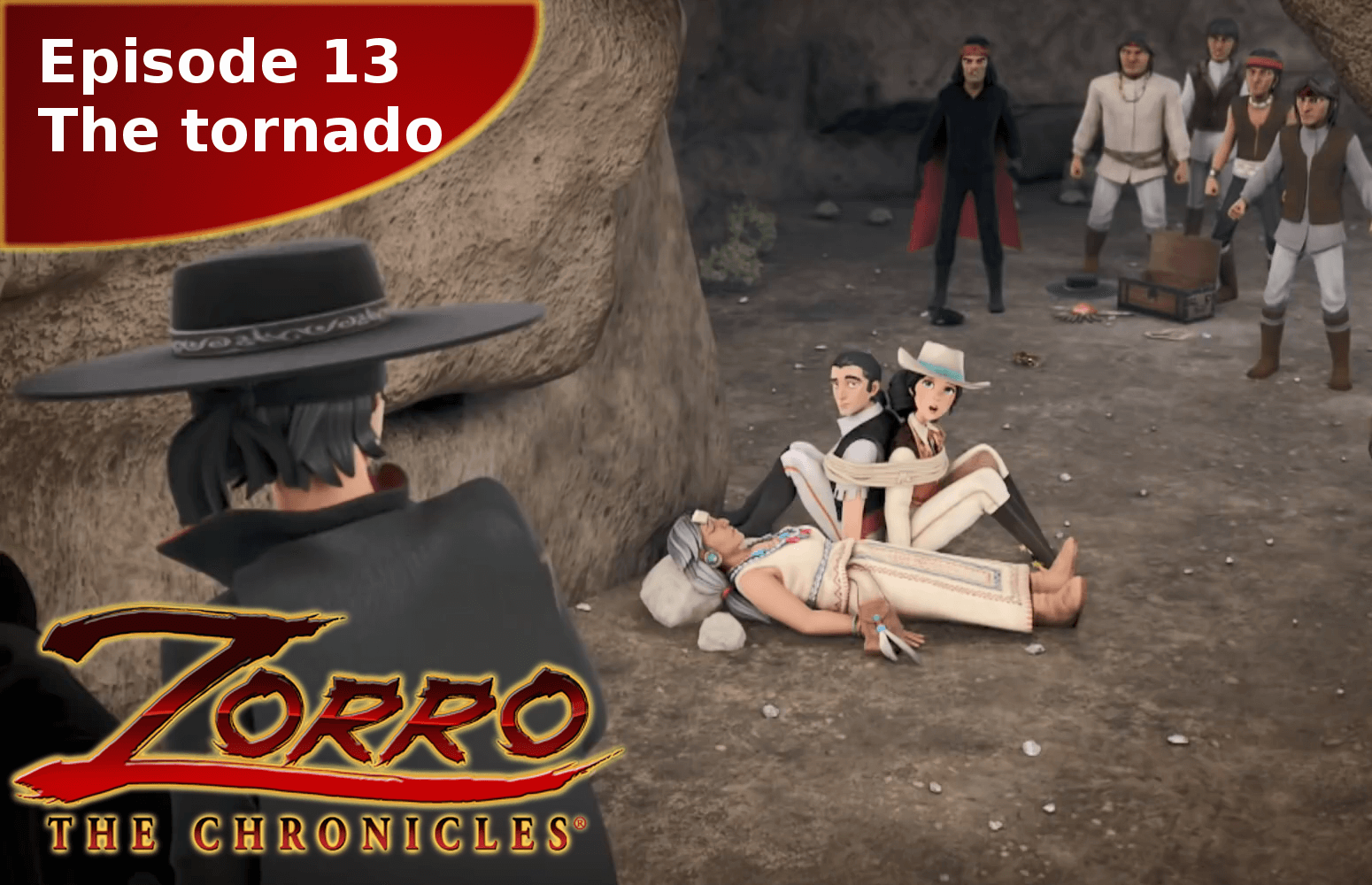 We present Zorro the Chronicles episode 13 The tornado— plot summary, our subjective review, the episode itself and the list of creators. Don’t forget about the next episode! You’ll find a link to it at the bottom of the page.

Zorro the Chronicles episode 13 “The tornado” starts very innocently. The warm Californian sun shines on, grandma Tainah collects wildflowers, and the little Indian girls play on the boat. However, the shaman has a vision; in the river, she sees the reflection of the storm clouds. Despite the fact that there seems to be no sign of any weather change, preparations for it begin in the village.

At the ranch, Inez and Bernardo help don Alejandro with the cattle. The animals are restless and the storm clouds are slowly appearing in the sky. The girl is worried about her grandmother, but her father reassures her that Tainah has a lot of experience and surely predicted the danger. When they finish their work, Inez and Bernardo go to help relatives in the village.

Also in the pueblo, everyone enjoys a nice day. Sergeant Garcia is the most pleased of all. He is about to befriend the roasted chicken carcass, but sadly is not allowed to taste the delicacy. Surprised by the commandant’s scream, he tosses the food, which is kicked by a running Gonzales, bounces off the lantern and the sergeant’s head, and finally lands in a poo. A real tragedy! Soldiers are needed to load the gift box for the governor onto the cart. A collision makes the corporal drop the package which opens. There are valuables and Indian treasures inside. The mask of a warrior is blown by the wind. It goes straight into Diego’s hands, who gives it to Garcia and learns about the gift. The young man recognizes a priceless artifact of the Yaqui tribe.

How to slander Zorro and retrieve the tribal treasure

Yuma and his men come to the Malapensa hacienda. Don Rodrigo tells them what the captain’s gift for the governor contains. He does not suspect Monasterio of theft, but rather of carelessly buying the mask from a real thief. Yuma is outraged that the vessel containing the spirits of his tribe’s ancestors has fallen into the wrong hands. Malapensa promises to help retrieve the mask in exchange for the remaining valuables. He gives the Indian the Zorro outfit, proposing to blame the local renegade for taking the chest. Yuma accepts the plan without hesitation. On the one hand, he will retrieve the priceless mask, and on the other, he intends to teach Zorro a lesson.

A gusty wind is already blowing in the pueblo, but the captain orders the departure in an hour. Garcia decides to spend this time in a tavern, leaving the preparations to the corporal and two privates. He manages to reach the porch, but has to hold tight to the horse crossbar to keep himself from being blown to the other side of the square. His subordinates are not much luckier; their frightened horses throw them away and escape. In such unfavorable circumstances, Yuma dressed as Zorro attacks. Even the captain’s desperate grip on his shoe does not prevent the entire chest from being stolen.

The more, the merrier, or a very popular cave

Garcia and Gonzalez are given a terrible task of catching the frightened steeds. They are noticed by a passing by Diego, who learns from the soldiers about the theft. In return, he advises them that faking mares neighing should help. He rushes home and, to his father’s satisfaction, promises to check if all the animals are safe. In fact, he goes to the hideout to transform into his alter ego and start looking for thieves.

In the village, the Indians are finishing their preparations. They take food supplies and blankets with them. Together with Inez and Bernardo, they go to the cave system, where Tainah has hid from similar storms many times before. Unfortunately, the weather gets worse and the shaman is hit with a branch blown by the wind. She is semiconscious, so the grandchildren put her on a stretcher and take her to the nearest cave. The rest of the tribe is hiding elsewhere.

Soon after that, the Yaqui arrive with Yuma dressed in black. They bind the surprised Inez and Bernardo. The girl makes several sarcastic remarks about both Zorro and the Indian leader as he takes off his mask. She prompts the Indians to betray their partner, since they care only for the artifacts of their ancestors, not the valuables. She almost manages to achieve her aim.

The cave turns out to be popular because the real Zorro also ends up there. He sees the horses in front of the entrance and recognizes them immediately. Inside, he effectively disarms the Indians and cuts the ties which bind his friends. He insults Yuma and teases him in order to lure him out for a chase. However, the Yaqui chief remains sensible despite his anger and leaves two subordinates to guard the captives. The others follow the black renegade. Tornado easily escapes, so Yuma stops his companions as he concludes that the pursuit is pointless. They go back to the cave.

Plan A has failed. It’s time for plan B – let’s use the soldiers

Zorro sees that the attempt to distract the Yaqui has failed. He ends up in a clearing, where Sergeant Garcia and the corporal are still trying to catch their horses with no success. The renegade comes up with the idea of involving the garrison. He rushes the mounts to the pueblo, and the soldiers, in order not to be left behind, jump on them while running. Zorro asks Captain Monasterio for help, and he is promised to be caught in response. That’s exactly what he wanted, so he thanks his nemesis. He directs the military pursuit towards the caves. During this time, the weather gets significantly worse and a tornado funnel is formed.

As a result, three groups meet in the clearing in front of the cave – the Yaqui, the soldiers and Zorro. The captain learns the identity of the disguised man who stole his chest. The soldiers are chasing everyone now, the Yaqui are chasing Zorro, and Zorro… is riding round and round 😉 Charges, sudden turns and changes of direction efficiently administered by Tornado end up with a huge collision and falling off the saddles of all but Zorro. Bernardo, who escaped from the cave, joins the fight and throws bits of wood at their heads, successfully knocks out the Indians and soldiers.

Meanwhile, there is a horse duel between the captain and the renegade who tries to make Monasterio realize that he is attacking the wrong man. The commandant proudly disarms Zorro only to find himself on the ground seconds later with a “Z” on his uniform. A tornado interrupts the fight and everyone goes hiding. The sergeant, however… well, he’s having unforgettable moments flying around the spinning funnel and landing on the captain. 🙂 Luckily for him, the tornado does not last long.

Tornado is over, Yuma has retrieved the mask, and Tainah has recovered — in other words, a happy end

Inez stayed with the unconscious grandmother in the cave and is horrified to see Yuma approaching with a musket. However, the Indian is quickly disarmed with Zorro’s whip and runs away. The siblings take Tainah to the hacienda.

In the morning the shaman is fully recovered. Sleepy Diego joins the family, complaining loudly about the cow he had to chase all night long. Everyone chuckles, but when the young man offers to present a poem he wrote for this occasion, he is shouted down in unison. After an adventurous night, his poetry is probably not wanted.

Soldiers also return to the garrison in the morning. Two horsemen lead the quarreling Yaqui captives, and the captain is carried by Gonzales and Garcia. The Indians observes with hope Don Rodrigo approaching. But Malapensa, instead of pleading for the prisoners, congratulates the soldiers on catching them. On the threshold of the commandant’s quarters, there is a box with gifts for the governor, decorated with the sign of Zorro and a note for Monasterio. Inside, there are all items except for the Indian artifact.

Zorro heads to the Yaqui camping out on the prairie and gives them the masks of his ancestors stolen from their tribe. Yuma appreciates the gesture and the opponent.

In this full of action, gripping episode, the creators really suprised us with Zorro’s opponents. The renegade not only struggles with the soldiers and the Yaqui tribe AT THE SAME time – he also fights against terrible weather! What’s more, the music accompanying the incoming tornado sounds great, and Zorro has a very clever plan to put his enemies against each other.

Using the California’s climate in Zorro story is one of the best ideas. The tornado is introduced in a very interesting way – with the help of Tainah’s magical vision. We also see that animals sense the change in weather earlier than humans. These are all very interesting and educational details. I am only wondering about this tornado’s power. Because, you know, the wind doesn’t allow Garcia to get to the inn. But later, when the weather gets worse, Zorro has a duel with Monasterio as if nothing was blowing right now. Even his sword, thrown upwards, obediently returns straight to his hand. As if a moment ago there was not even the slightest gust of wind! But this is Zorro, the laws of nature apparently doesn’t apply to him here.

Indian with a past

Yuma is slowly becoming my favorite character in this cartoon. He is young and therefore a bit too naive (first rule while living in Los Angeles – don’t trust Malapensa!). But he is clearly trying to be a good leader for his people. He is frustrated with what happened to his tribe, so it’s easy to understand him. Even when he sides with the bad guys. He realizes very wisely that there is no point in chasing Zorro, the idea  Monasterio probably never came up with. 😉 And when at the end he appreciates the renegade despite his previous hostility, we see that there is hope for Yuma!

The main comedians of the episode are Garcia and Gonzalez, of course. The chicken situation at the beginning or chasing horses are fantastic scenes. A flying sergeant, caught in the tornado, is also incredibly funny. Although as he was falling, I let out a compassionate “ouch!” And then another when I saw that he had fallen on the commandant. No wonder the unfortunate Monasterio was unable to return to the garrison on his own. He has my full respect and admiration for surviving Garcia’s falling on him. 😉 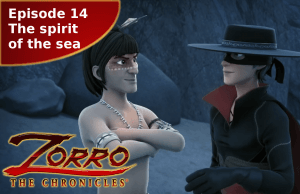 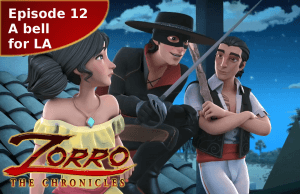 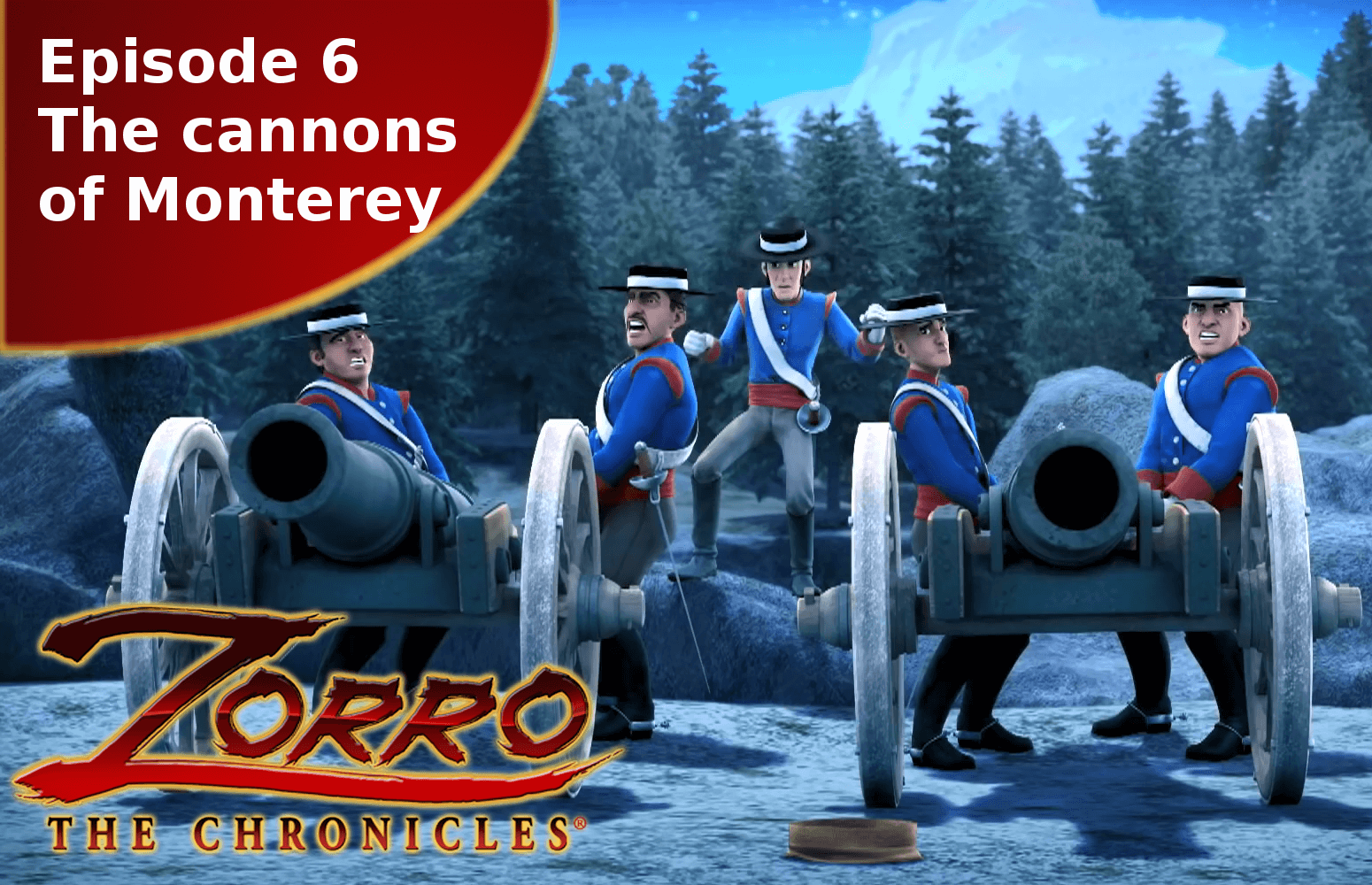 Zorro the Chronicles episode 6 The cannons of Monterey 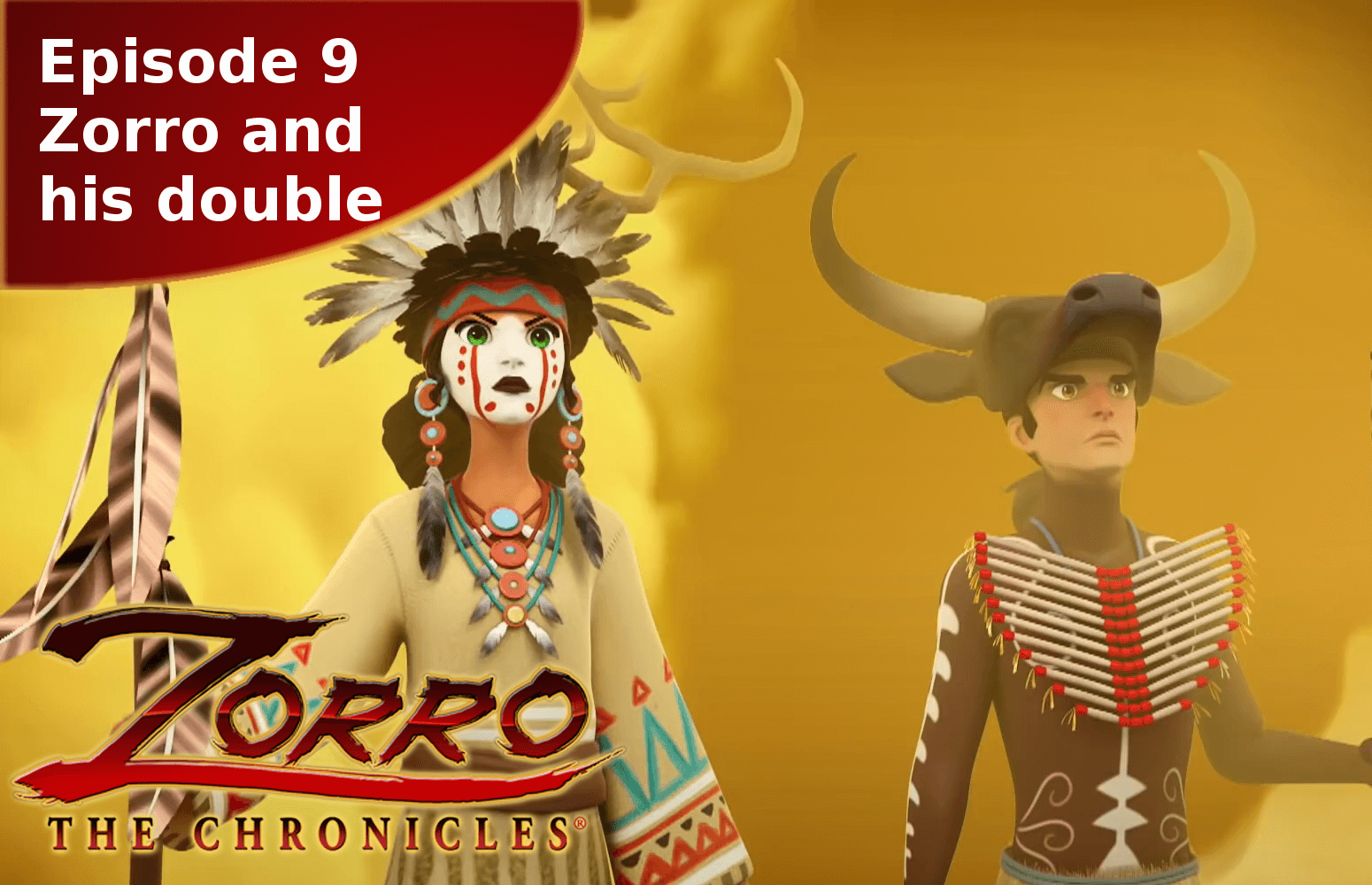 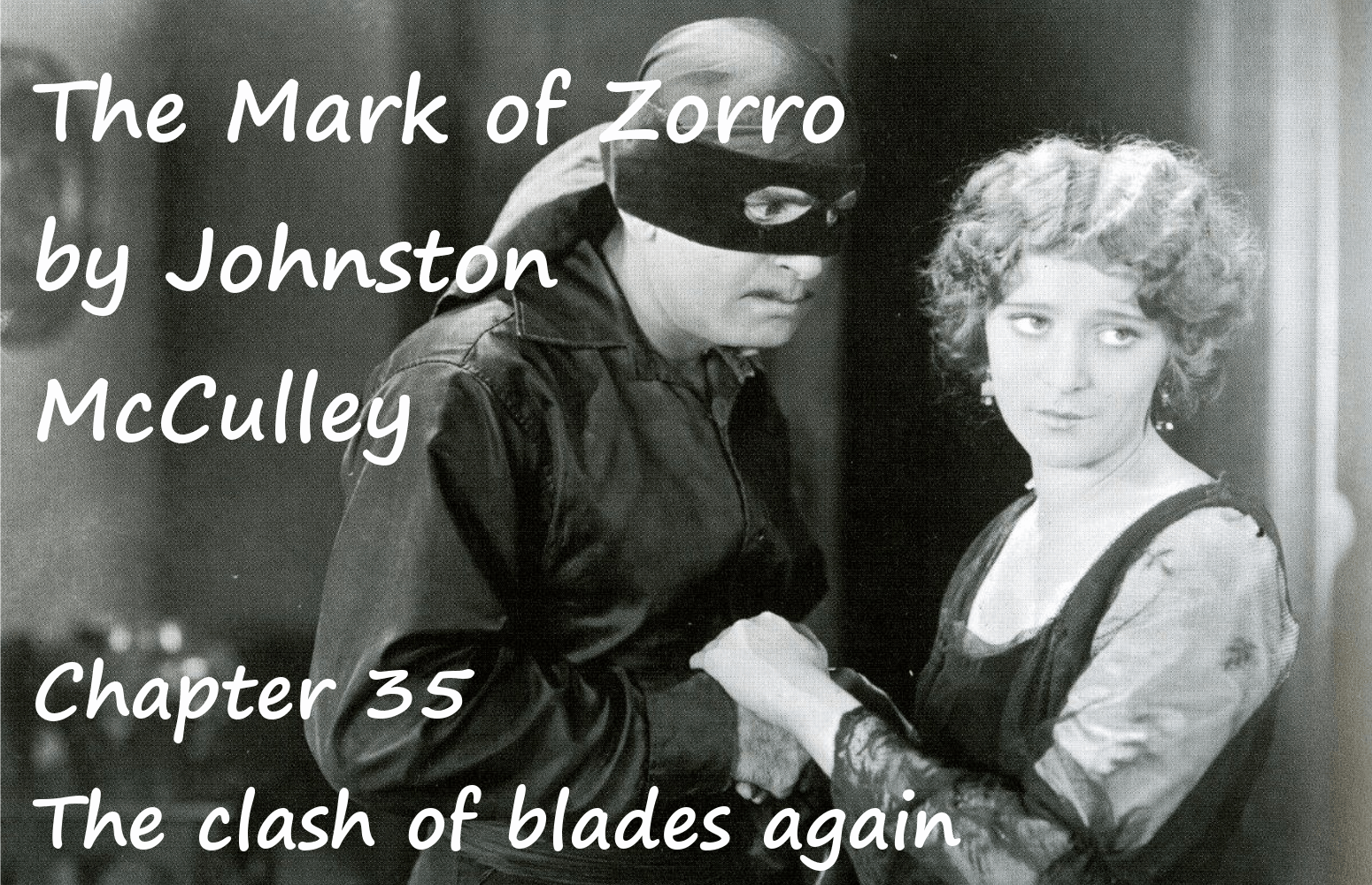 The Mark of Zorro chapter 35 The clash of blades again