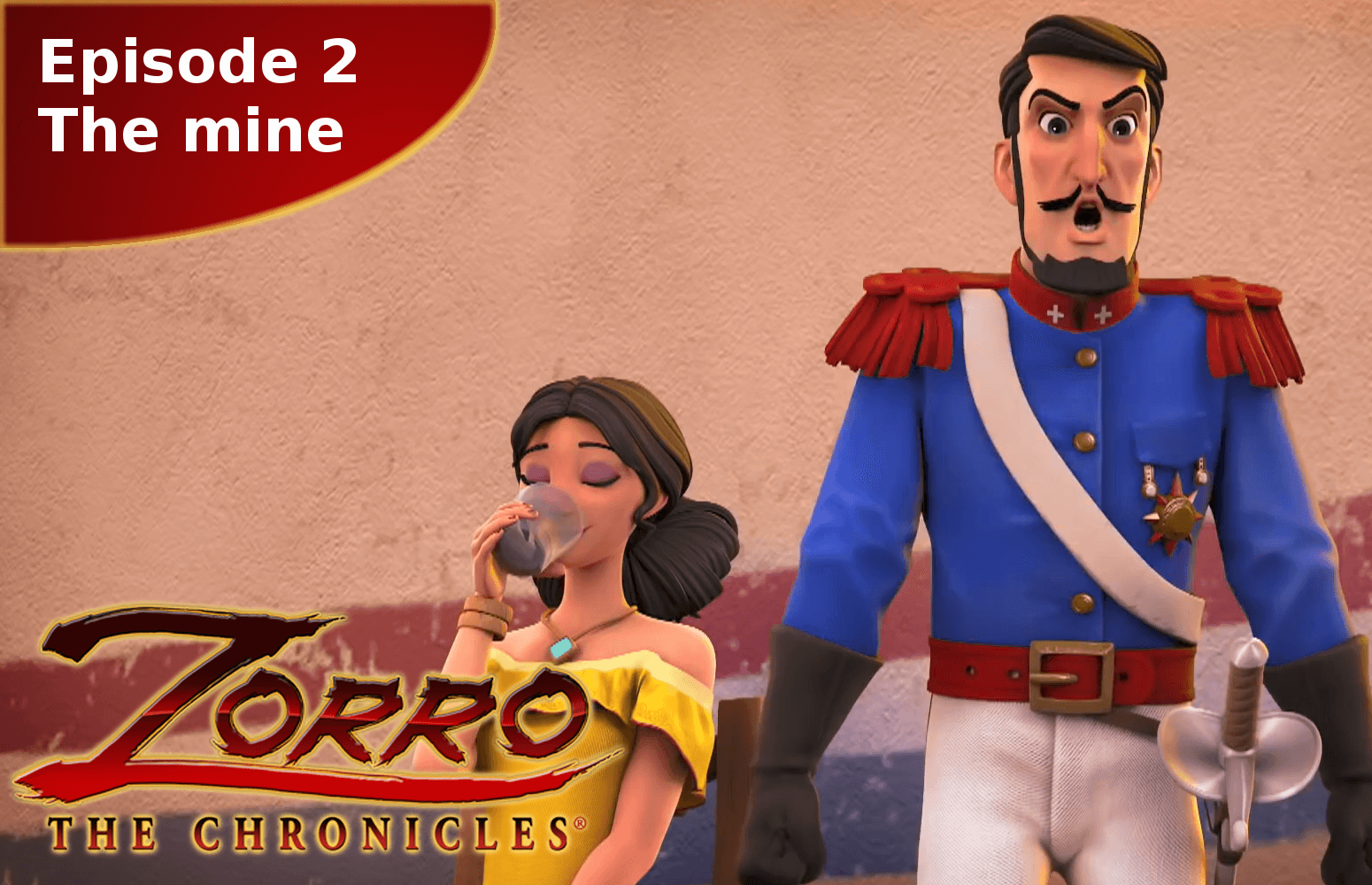 We present Zorro the Chronicles episode 2 The Mine – plot summary, our subjective review, the episode itself and the list of creators. Don’t forget about the next episode! You’ll find a link to it at the bottom of the page.

Zorro the Chronicles episode 2 “The Mine” begins quite innocently. The inhabitants of the de la Vega hacienda are getting ready for the ball at the governor’s, don Parasol. Diego sneaks out to go to the ancestral tree to pay respect to his late mother. He meets a boy there from the Chumash tribe, who tells him during the conversation that the men from the village have been taken to forced labour. While driving the kid home, they witness the ill-treatment of the Indians done by soldiers, in particular by Corporal Gonzalez. Diego’s grandma confirms his fears.

The heir of de la Vegas decides to use the ball to explain the situation with the governor. Don Parasol turns out to be a self-righteous and selfish official who cares only about his own comfort. He does not care about the fate of the Chumash and even has trouble articulating the name of the tribe. Ines, who is dancing with captain Monasterio, also has the opportunity to investigate. He promises her wealth when she marries him but does not reveal its source. The last of the three conspirators is more fortunate. Bernardo takes advantage of Sergeant Garcia&#8217;s greed and belief in de la Vega&#8217;s servant&#8217;s deafness.

On the terrace of the governor&#8217;s residence, young de la Vegas and Velazquez share their knowledge and conjectures. Well, the captain has forced the Indians to slave labour in a secret mine and has no intention of reporting it to the authorities.

The next day, Ines goes to the pueblo and Diego shows Bernardo the cave of Zorro. He also introduces  Tornado the horse. The whole plan is based on perfect timing. Ines causes a carriage accident outside the garrison gate at the exact moment when the unit tries to leave for the mine. Repairing the vehicle and hosting the senorita cause a significant delay, which is supposed to give Zorro time to act.

Meanwhile, the Indians work hard in the mine, supervised by soldiers. By skillfully throwing down pebbles, Zorro starts an argument between Garcia and Gonzalez, who accuse each other. When the renegade is finally spotted, the guards chase him and the Indians rush as well&#8230; just to run home. 🙂

Zorro covers most of the entrance to the mine with an avalanche and engages the lancers in a fight. Reinforcements led by the captain arrive, and a barrel of gunpowder rolls into the mine during the duel. An accidental ricochet and the bandit&#8217;s escape into the mountain ends with a powerful explosion and covering him alive. Everyone is convinced of his death, even a devastated Bernardo, who is worried about his friend. Suddenly, a black-gloved hand gives him a handkerchief. Zorro used the side ventilation shaft and escaped unscathed.

Zorro the Chronicles episode 2 The mine — review

A mine operating in secret is not a very original theme, but it certainly holds some attraction. The most interesting part of episode two is discovering this new intrigue step by step. You can see that Diego, Ines and Bernardo make a great team when they join forces. Each of them at the ball learns some piece of information. That knowledge, when put together, leads them to the right conclusion.

Ines was promoted to a spy! She is incredibly cute and sneaky as she tries to get information out of the captain while dancing and then sets up a scene to avoid being kissed. Or later, when she breaks down the carriage right in front of the garrison, obstructing the march of the troop, and even asks for water. Monasterio would be equally charming with his gallantry if it were not directly linked with the desire to marry the girl&#8217;s fortune.

In this episode, we learn not only about the captain&#8217;s wishes, but also about the nature of his soldiers. Particularly Corporal Gonzalez shows his cruel side when bullying Indians gives him apparent satisfaction. The creators also introduce a very interesting motive of Diego&#8217;s Indian roots and the story of his mother&#8217;s death. There is also a new character, the governor. His high disinterest in society&#8217;s problems and ignorance immediately make him one of the villains, although of a more ambiguous type.

The clumsiness of soldiers is still its source. Corporal Gonzalez is eager to beat the Indians, but he can&#8217;t even use a whip. Moreover, the thirst for promotion makes the lancers only interrupt themselves during their capture of Zorro. The masked renegade really doesn&#8217;t have much to do with them, although Monasterio himself is fighting this time. Well, the captain even has a pistol with him, which he for some reason doesn&#8217;t use. Or rather he does, but only after Zorro has already escaped from him. This is a very far-fetched story solution.

Don Alejandro doesn&#8217;t know that there is a secret passage in his house that leads to the huge cave? I can&#8217;t believe it. The script writers are also trying very hard to make us worry about the fate of Zorro, who disappeared in the mine just before the gunpowder exploded in it. And although Bernardo&#8217;s despair is heartbreaking, nobody is going to believe that they killed the main character in the second episode! Finally, when the mine is lost and Zorro shows that he was not harmed at all, another scene that is hard to believe follows. Well, Monasterio, instead of chasing the renegade, as is his custom, allows &#8230; to be preached how wrong his idea of getting a fortune was. He even lowers his head like a reprimanded student. Captain, what has happened to you? Has the explosion damaged your brain?

Visually, the cartoon continues to delight. We have the opportunity to admire the fauna and flora of California, which is quite educational. Zorro&#8217;s secret cave is impressive. The Governor&#8217;s Ball is one big glorious scene. The characters&#8217; costumes are beautiful and rich in detail. Ines undoubtedly wins the award for the best-dressed senorita. The award for the best-dressed senor goes to Captain Monasterio. What a wonderful dress uniform! 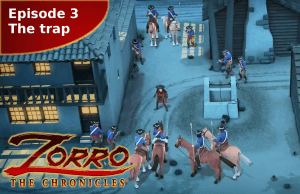 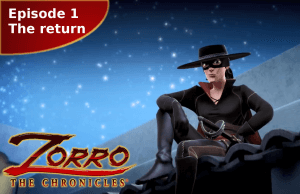 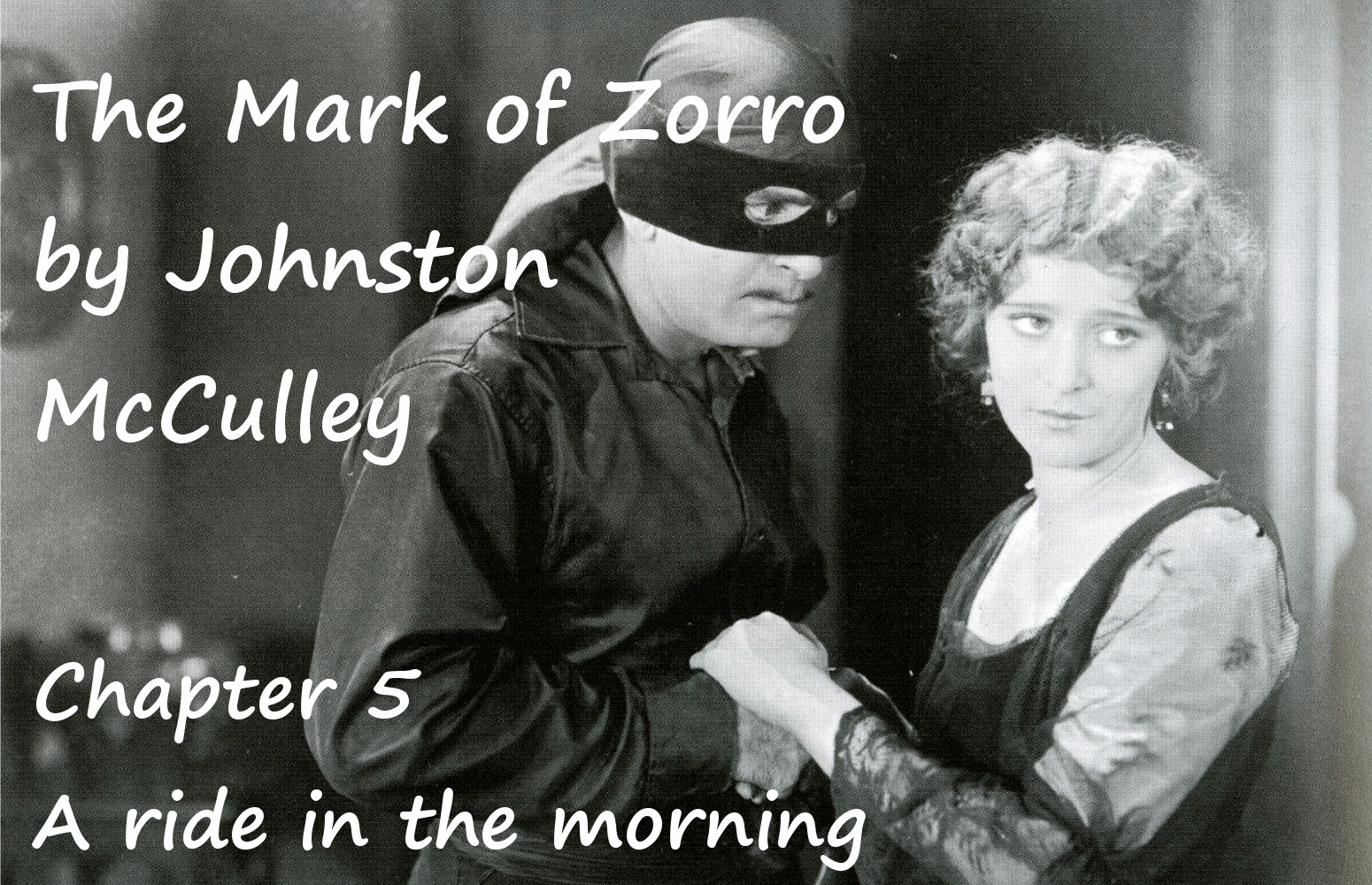 The Mark of Zorro chapter 5 A ride in the morning Zorro the Chronicles episode 14 The spirit of the sea

One thought on “Zorro the Chronicles episode 2 The mine”